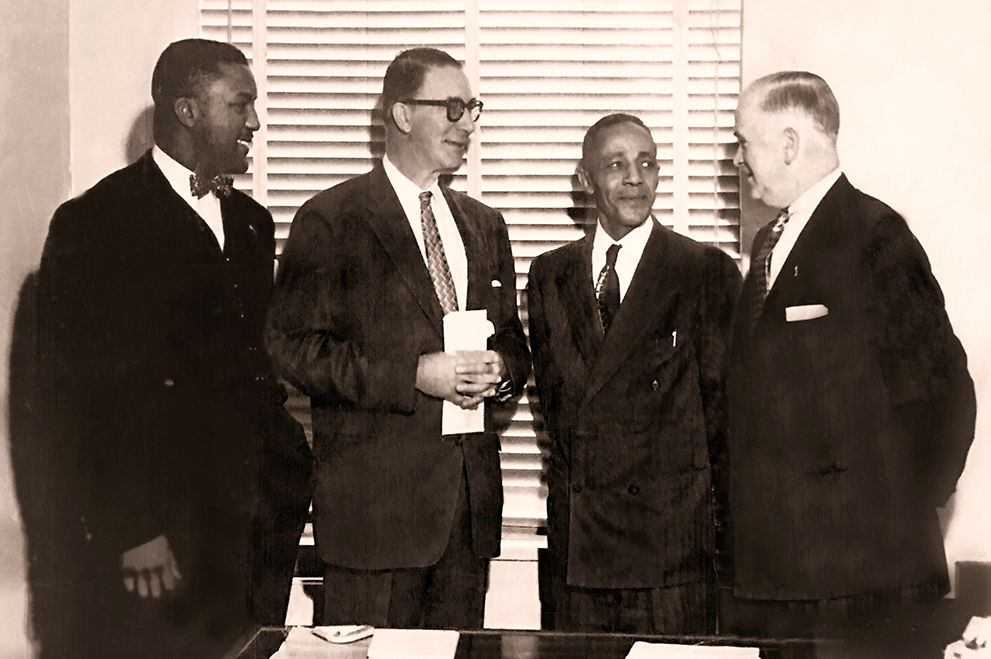 Robertson joined the Civilian Conservation Corps (CCC) and was deployed to Gulf Port, Mississippi, where he met and married Nellie Mae Barnes on May 14, 1936. They had two children when they moved in 1941 to Washington, D.C.

Robertson enrolled in Howard University in 1944 in a dual degree undergraduate and law school program. He graduated in 1948 at the top of his class with combined degrees (B.A. and LL.B.). During this time, Robertson wrote This Bird Must Fly, a book about the adverse impact of segregation on African Americans, by chronicling the racism he experienced under Jim Crow Laws.

Upon graduating, the admissions committee at Harvard University Law School offered him a full scholarship to pursue an LL.M. degree, which he turned down to support his growing family. Robertson and classmate James Madison Nabrit, Jr., worked in the movement with future Supreme Court Justice Thurgood Marshall and attorney George E.C. Hayes to dismantle segregation through the courts.

Robertson was admitted to the bar in the District of Columbia in 1949, initially working as a sole practitioner before establishing the law firm Robertson & Roundtree in 1952 as the senior and managing partner, with Attorney Dovey J. Roundtree. In the U.S. Supreme Court’s 1952 October Term, Attorney Robertson was admitted to practice before the high Court. Besides the initial 1952 case, he would argue other cases in 1954, 1955, 1959, and 1960.

Robertson was the lead attorney on the 1955 precedent-setting case Sarah Keys v. Carolina Coach Company. Robertson and Roundtree took the Sarah Keys’ complaint to the Interstate Commerce Commission (ICC) which on November 7, 1955, ruled that segregated interstate bus travel was banned, an explicit repudiation of the “separate but equal” doctrine in transportation that evolved from the 1896 Plessy v. Ferguson Supreme Court decision. The ICC decision was hailed as a significant breakthrough for the civil rights movement.

Robertson was a gifted intellectual with a broad range of knowledge of national and international geopolitics. As a constituent of Senator Estes Kefauver (D-TN.), Robertson met with him many times to discuss Civil Rights issues. Kefauver learned that Robertson spoke, read, and wrote fluent German, and asked him to review the “Nuremberg Code” and trial transcripts, as a premise for legislation to protect American citizens from criminal medical experimentation.

Robertson’s research provided crucial background for the bill that Kefauver and Rep. Oren Harris (D-Ark.) sponsored to establish a framework requiring drug manufacturers to prove that medications they developed were safe and effective scientifically. This legislation, which became known as the Kefauver-Harris Amendment, was signed into law by President John F. Kennedy on October 10, 1962.

Julius W. Robertson died in his home in Washington, D.C., on November 4, 1961, at the age of 45. His legacy continues in his surviving children, Annette M. (Robertson) McGee and her sister, Mrs. Dale (Robertson) Ore, and their children, who are lawyers and human rights activists.