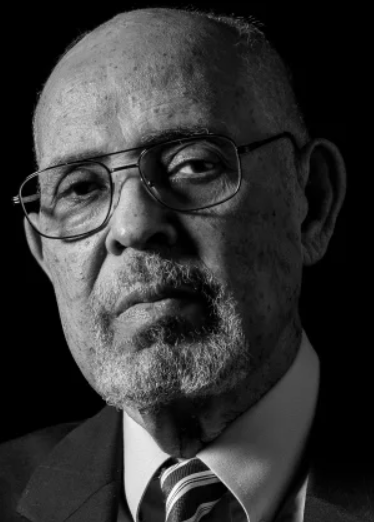 James A. Joseph is a lifelong educator and public policy activist who served as the first African American U.S. ambassador to post-apartheid South Africa from 1996-1999.  Joseph has worked to promote leadership opportunities in both the corporate world and through the Federal government.  The father of two children, he is currently married to journalist Mary Braxton Joseph.

Born in Opelousas, Louisiana in 1935, Joseph earned a B.A. in political science and social studies at Southern University in 1956.  After two years in the U.S. Army, Joseph enrolled in Yale Divinity School to earn a Bachelor’s of Divinity in 1963.  In the following years, he taught at Stillman College in Tuscaloosa, Alabama and the Claremont Colleges in Claremont, California before being hired as associate director of the Irwin-Sweeney-Miller and Cummins Engine Foundations in 1967.  An ordained United Church of Christ minister and civil rights activist, Joseph found new opportunities to advocate for public humanitarianism through these Indiana-based philanthropies.  By 1972, he was promoted to become vice president of the Cummins Engine Co. and president of the Cummins Engine Foundation.

In 1977, President Jimmy Carter appointed Joseph to be Under Secretary of the Interior, citing Joseph’s business and philanthropic experience.  In this position, he helped develop an Office of Minority Business Enterprise and urged greater attention to recreational areas located near or in urban centers, pointing out that most national parks remained out of reach of minorities in America’s inner cities.

Joseph’s public activism was recognized across traditional party lines.  President Ronald Reagan appointed him to the Advisory Committee to the Agency for International Development while his successor, George H.W. Bush selected him to serve on the board of the Points of Light Foundation and the Board of Advisors on Historically Black Colleges.  Under President Bill Clinton, Joseph joined the Board of Directors of the Corporation for National Service as Chairman.  Joseph often participated in U.S. trade and political delegations to various nations in Africa or the Pacific, including visiting South Africa to promote transition away from the traditional segregationist apartheid governmental system.

On December 19, 1995, President Bill Clinton appointed Joseph as Ambassador to South Africa. Although his appointment was briefly held up by North Carolina’s Senator Jesse Helms, Joseph was confirmed by the full Senate and arrived in Pretoria, the capital of South Africa, where he presented his credentials to President Nelson Mandela on February 27, 1996.  Joseph arrived in South Africa with his second wife, journalist Mary Braxton Joseph, who produced two documentaries for the Public Broadcasting System (PBS) on the changes in South Africa after the fall of apartheid.  By 1999, as Joseph prepared to conclude his service in South Africa, President Thabo Mbeki presented him with the Order of Good Hope, an award for distinguished service in international relations.  His term as U.S. Ambassador to South Africa ended on November 7, 1999.

Joseph returned to the United States where he continues to be active in promoting democratic opportunities around the globe.  He founded the Emerging Leaders Program, a joint venture between the University of Cape Town and Duke University and has served on the Board of Directors of the Brookings Institute and the Children’s Defense Fund.  He is a current member of the Council on Foreign Relations and the National Academy for Public Administration.