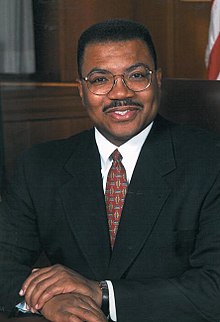 Joseph Bernard Rogers was a Republican politician who served as the 45th Lieutenant Governor of Colorado. Rogers was born in Omaha, Nebraska on July 8, 1964, to Joe Louis and Lola Marie Rogers. His parents divorced in 1966, and his mother moved to Denver, Colorado. He attended Bradley Elementary School, Kearney Junior High, and Adams City High School, where be played the trumpet in the jazz band, and ran on the track team. Rogers attended Colorado State University, majoring in Business Administration. In his sophomore year he was initiated into the Alpha Phi Alpha fraternity, Omicron Tau chapter and he also served as the President of Congress of Afro-American Students for two years. During the 1983-1984 academic year, Rogers was the first African American to be elected Homecoming King at Colorado State. He graduated in 1986 with his BA.

Rogers earned a scholarship to attend Arizona State University Law School and after graduation he first worked as a Contract Associate with the firm Harris & Palumbo. He then worked for the firm of Snell and Wilmer, and next was an extern clerk for the US District Court of Arizona. Rogers also provided pro-bono legal services to low income families in southeast Colorado as part of the Colorado Bar Association’s Lend-A-Lawyer program.

Beginning in 1989 Rogers worked with one of Colorado’s most prestigious law firms, David, Graham & Stubbs remaining there to 1993. While a student at CSU, Rogers met Juanita Hardy, and the two married on July 25, 1992. The couple had three children: Trent Joseph, Jordan Kay and Haley Nicole. Rogers then moved to Washington, D.C., and served as legal counsel to former U.S. Senator Hank Brown of Colorado for two years.

Returning to Denver in 1996, Rogers became the first black candidate to run congress in Colorado, for Colorado’s First Congressional District seat, recently vacated by retiring Congresswoman Pat Schroeder. He gained 42% of the vote in a losing effort. In 1998, he ran for Lieutenant Governor of Colorado, alongside Bill Owens, the GOP candidate for Governor, and won by nearly 60% of the vote. In 1999, he was sworn in as the youngest Lt. Governor in the nation at the age of 35, and just the second African American in Colorado to hold the position, and the fourth in the United States.

Rogers served as Chairman of the National Conference of Lieutenant Governors and was a principal speaker at the 2000 GOP National Convention. His term in office ended in 2002 and he did not seek reelection. Rogers became active as a speaker, strategist and national consultant. He spoke nationally at school and universities through his “Dream Alive” program and served as one of seven members of the National Commission on the Voting Rights Act. Rogers received a Trumpet Award from Time Warner’s Turner Broadcasting and was author of the book The Letter To My Son.

Joseph Bernard Rogers passed away suddenly on Monday, October 7, 2013 at the age of 49, at Rose Medical Center in Denver. He lay in state at the Colorado Capitol Rotunda on October 15, and was interred at Fairmount Cemetery, in Aurora.