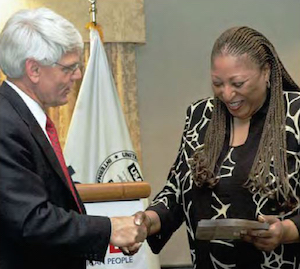 Mosina Jordan was born in Daytona Beach, Florida in 1943, to Frank Montero and Alice Mann.  In 1964, she graduated with a Bachelor’s degree in Social Work from New York University. After she earned her Juris Doctorate from American University in 1973, Jordan became a civil servant, working for the U.S. Senate Appropriations Committee, and for the Community Services Administration.

In 1982, Jordan started her career with the U.S. Foreign Service as an Administrative Officer for Economic Programs for the United States Agency for International Development (USAID) in Washington, D.C. After working at USAID headquarters for seven years, she rose in rank to become a Senior Deputy Assistant Administrator.  Her first overseas experience came in 1989 when she served as a USAID Representative to Belize. From 1991 to 1995, Jordan supervised various USAID missions as Director for Regional Development in the Eastern Caribbean from an office in Bridgetown, Barbados. In this position, she directed a $24 million development program that promoted economic diversification, free trade, and legal reform for regional sustainability for seven Caribbean island nations.

In 1995, Jordan was appointed Ambassador to the Central African Republic (CAR). Her mission was to promote economic diversification, free market economic development, democracy, and human rights in a nation transitioning to democracy after decades of dictatorships. On May 21, 1996, this mission abruptly changed when CAR army soldiers staged a mutiny at the capital, Bangui, over unpaid wages. Jordan responded by closing the U.S. Embassy, and having her staff and other Americans safely evacuated to nearby Cameroon with the assistance of 35 U.S. Marines. The Embassy at Bangui remained closed until 1998.  Eventually USAID and Peace Corps staffers left as well. Ambassador Jordan, whose term would have officially ended 11 months later (March 31, 1997), was one of the last to leave Bangui.  Operating out of the U.S. Embassy in Yaoundé, the capital of Cameroon, Ambassador Jordan served as USAID Deputy Mission Director in the Cameroon.

After her term as ambassador officially ended, Jordan returned to the United States and then was USAID Mission Director to Jamaica and the Eastern Caribbean. For five years, she worked on socioeconomic development and reform in Jamaica, Barbados, and Guyana.

In 1998, Jordan became a Senior Foreign Service diplomat with the rank of Minister Counselor. In 2005, the U.S. State Department recognized her as a model for diplomats forging genuine partnerships in U.S.-Caribbean relations. In that year she became the first African American to serve USAID as Agency Counselor.

In 2008, Mosina H. Jordan retired from the Foreign Service to run her own human resource consulting firm. Among her many awards was the Presidential Meritorious Rank Award in 2007.?