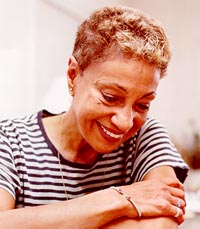 June Meyer Jordan, writer, editor, poet, educator, environmental and social activist, was the only child of Granville Ivanhoe and Mildred Maude Fischer Jordan who were Jamaican immigrants. June was born in Harlem on July 9, 1936.  June’s father worked as a night shift postal clerk and her mother was a part-time private-duty nurse.  The family lived in Harlem until June was six years old, when they moved to the Bedford-Stuyvesant area of Brooklyn.  June’s father subjected her to serious physical abuse that continued throughout her childhood.  It was in this terrifying environment of bullying and severe beatings, that seven year old June found solace in the written word and began writing poetry.  In her memoir, Soldier, a Poet’s Childhood, she credited her father’s treatment with influencing her to write and introducing her to literature.

June Jordan attended Milwood High School in Brooklyn where she was the only African-American out of three-thousand students.  She transferred and attended a religious private high school, Northfield School for Girls in Massachusetts where she graduated in the spring of 1953.  In the fall of the same year, she returned to Brooklyn and enrolled at Barnard College.  In her second year of college, nineteen year old June met and later married Michael Meyer, a white student from Columbia University.  She withdrew from college to follow her new husband to the University of Chicago where he was a graduate student of anthropology. In 1958, June gave birth to their son, Christopher David Meyer.  Her marriage to Michael Meyer ended in divorce after eleven and a half years.  As a single parent, Jordan devoted her life to writing poetry, studying, and doing free-lance journalism to support her son and herself.

In the 1960s Jordan also became a Civil Rights activist, joining busloads of “Freedom Riders” to Baltimore as they traveled demanding enforcement of Supreme Court decisions on desegregation.   In 1963, Jordan worked as a production assistant for “The Cool World,” a documentary film about how environmental changes could benefit poor Black families in Harlem.  Jordan wrote her first book of poetry Look at Me, a book on African American life, in 1969.  The next year she edited an anthology of poetry by children, youth and well-known poets, entitled, Soulscript; A Collection of African-American Poetry.  In 1971 Jordan wrote a novel for young adults, His Own Where, once more addressing her interest in environmental concerns.

During her career Jordan authored twenty eight books, and published numerous short stories in The Washington Post, The New York Times, and Partisan Review.  By 1967 Jordan was an instructor at the City College in New York.  She later taught at Sarah Lawrence College in New York, and in 1989 she became a Professor of African American Studies at the University of California at Berkley where she founded and directed the Poetry for the People Program.  Jordan received numerous awards and honors, including a Rockefeller Grant and National Endowment for the Arts Fellowship.

On June 14, 2002, June Meyer Jordan succumbed to breast cancer at her home in Berkeley, California. She was 65.  Her twenty-eighth book and seventh collection of political essays, Some of Us Did Not Die was published posthumously.