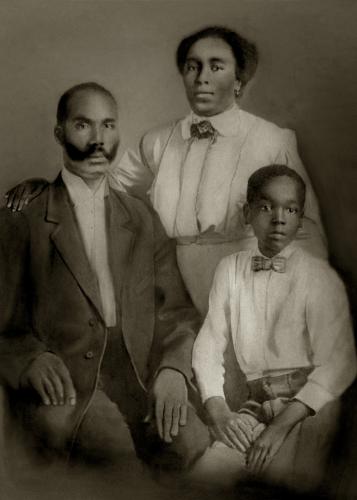 Dr. John Henry Jordan, the first black doctor in Coweta County, Georgia, was born in Troup County, Georgia on March 11, 1870, to Berry and Isabella Jordan. His father was a sharecropper and his mother died when he was two. As a child, Jordan was intent on becoming a doctor. He was an avid reader of medical journals and was later associated with several medical societies. Although his father did not support his decision to become a doctor, Jordan looked to Dr. Edward B. Ramsey, the first black doctor in Troup County, Georgia, for inspiration.

Jordan eventually studied at Dr. Ramsey’s alma Mater, Meharry Medical College in Nashville, Tennessee, but was forced to drop out due to financial difficulties. Jordan later returned to school and graduated as valedictorian of his class in 1896 and then briefly practiced medicine in Troup County before relocating to Coweta County. Upon his arrival in Coweta County, Jordan’s career flourished. In 1898, he married Clark College graduate Mollie Emma Ramsey, one of Dr. Ramsey’s daughters. Only one of the couple’s two sons, Edward Porter, survived infancy.

He built the first hospital for blacks in Coweta County and organized a Medical Aid Organization in which he taught his patients about health and hygiene. Jordan was also known as an astute surgeon. His skills eventually led white families in the county to seek his aid for medical treatment when he saved the life of a child from a wealthy white family after other white doctors had failed in their efforts.

Additionally, Jordan was a real estate investor, owner of a sawmill, and part owner of a general store. He used his earnings to purchase land and allowed black families to rent from him while encouraging them to eventually own the land themselves.

Jordan had also hoped to build the county’s first black library, but he died tragically at the age of 42 in a car accident while on his way to a house call in Newnan, Georgia.