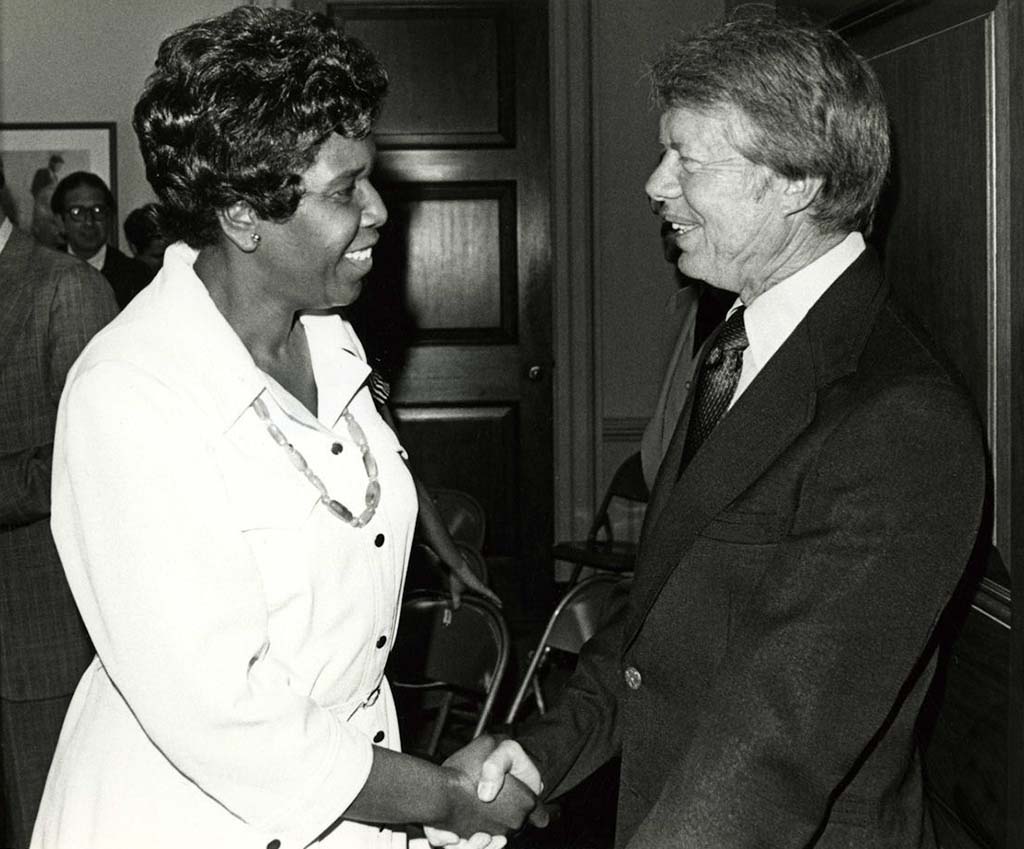 Barbara Charline Jordan was born in Houston Texas’s Fifth Ward on February 21, 1936. She received her education in public schools in Texas and graduated from Texas Southern University in 1956 with a B.A. in political science and history. Jordan then received her LL.B. from Boston University School of Law in 1959.  She was admitted to the Massachusetts and Texas bars in 1960. Afterwards, she decided to practice law in her hometown, Houston.  At the time Jordan was only the third African American woman to be licensed to practice law in Texas.

Barbara Jordan entered Houston politics in the early 1960s.  Though unsuccessful in obtaining the nomination as state representative in 1962 and 1964, in 1966 she became the first African American since 1883 to serve in the Texas Senate and the first black woman elected to that body.  She later served as president pro tem of the state senate and for one day in 1972, served as acting governor of the state.

In November 1972, Jordan, a Democrat and protégée of former President Lyndon Johnson, defeated Republican Congressman Paul Merritt to represent Texas’s Eighteenth District in the U.S. House of Representatives.  Jordan was known for her expert knowledge in constitutional matters.  With help from former President Johnson, Jordan obtained a seat on the House Judiciary Committee where she earned a national reputation for her prominent role in the President Richard Nixon impeachment hearings in 1974.

Jordan’s name appeared as a sponsor on several major pieces of legislation including the Consumer Goods Pricing Act of 1975, the Voting Rights Act of 1975 (an extension of the more famous 1965 measure), and the Equal Rights Amendment in 1977. The Voting Rights Act of 1975 extended to Spanish-heritage, American Indian, Alaskan Natives, and Asian American language minorities the provisions which had successfully registered to vote thousands of African Americans in the South in the previous decade.  Jordan also helped extend the state ratification deadline for the Equal Rights Amendment from 1979 to 1986. She was also a supporter of the Community Reinvestment Act of 1977 which required banks to lend money and make services available to under-served poor and minority communities.

In July of 1976, she became the first African American and the first woman to deliver a keynote address to a Democratic National Convention.  She returned as a keynote speaker at the National Democratic Convention of 1992.

In 1973, Barbara Jordan began to suffer from multiple sclerosis.  For some time she kept her illness from the public and the press, although she began to use a cane by the late 1970s and was eventually confined to a wheelchair.

In December 1978, Jordan chose not to run for the reelection to the Eighteenth Congressional District.  The following year she became a professor at the Lyndon B. Johnson School of Public Affairs at the University of Texas in Austin. Also in 1979 she was named Centennial Chairman of the Lyndon B. Johnson Institute for National Policy.  In 1994 Jordan was awarded the Presidential Medal of Freedom, and one year later, she became the second woman to win the United States Military Academy’s Sylvanus Thayer Award.  Jordan passed away in Austin, Texas on January 17, 1996.