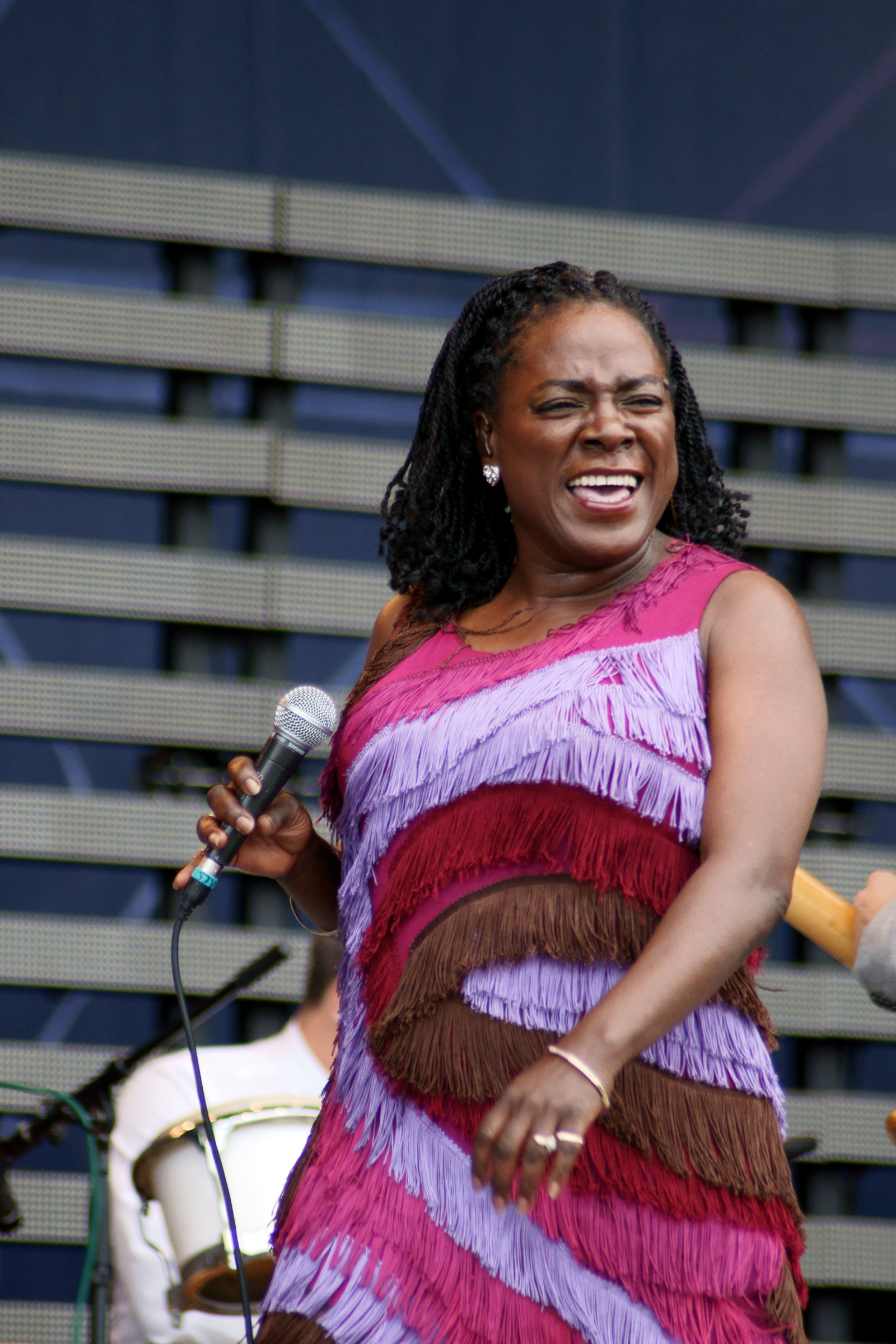 Rhythm and blues artist Sharon Lafaye Jones was born in Augusta, Georgia, on May 4, 1956. She was the youngest of six children born to Ella Mae Price Jones and Charlie Jones. The family moved to the Bedford-Stuyvesant neighborhood of Brooklyn, New York, in 1960. Jones graduated from Thomas Jefferson High School in 1975 and then attended Brooklyn College. She was an avid and frequent gospel singer at her local church. She tried out at several talent shows, sang background vocals, and attempted a solo career but was unable to garner any contracts of her own. She spent most of her life as a corrections officer on Riker’s Island and as a guard for Wells Fargo Bank.

Jones was discovered at the age of forty in 1996 by Gabriel Roth and Philipe Lehman, owners of a French record label, Pure Records. She first recorded “Switchblade” and “The Landlord,” which were released on the album, Soul Tequila. She organized members from former Brooklyn bands, Anitbalas and the Mighty Imperials, to form her regular back-up band, the Dap Kings.

With the success of the Soul Tequila album, Lehman and Roth started a new label, Desco Records, based in Brooklyn and released three 45 singles by Jones, “Damn Its Hot,” “Bump N Touch,” and “Hook and Sling Meets the Funky Superfly.” Roth and Lehman parted ways in 2000, and Roth then started Daptone Records. In 2002, the album Dap-Dippin with Sharon Jones and the Dap Kings was released. Three more albums followed: Naturally (2005); 110 Days, 100 Nights (2007); and I Learned the Hard Way (2010). With those releases, Jones was credited with spearheading a twenty-first century soul and funk revival and was tagged the female James Brown.

In 2007 Jones played the part of a Lila, a juke joint singer in the movie, The Great Debaters. She also collaborated with The Rolling Stones, Phish, Michael Buble, and performed in 2013 in the 87th annual Macy’s Thanksgiving Day Parade. Jones was nominated for a Grammy in 2014 in the category Best R&B Album.  A documentary entitled Miss Sharon Jones debuted at the Toronto International Film Festival in 2015.

In 2013 Jones announced that she had been diagnosed with bile duct cancer. The diagnosis later changed to Stage II pancreatic cancer, and she underwent surgery and chemotherapy. The treatment caused hair loss, and Jones performed bald, refusing to wear a wig. She suffered a stroke during the 2015 presidential campaign, telling hospital staff that Trump gave her a stroke. She died on November 18 of complications from that stroke in Cooperstown, New York, at the age of sixty.