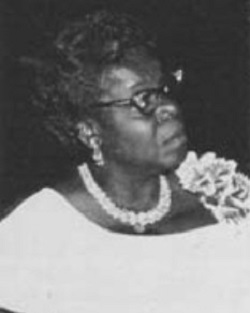 Jones’ career as an elementary school teacher spanned forty-seven years, 1933 to 1980. She gave to the children she touched, support, encouragement and a challenge to reach their potential. Her professional accomplishments occurred over a period of time that embraced both the segregated and integrated life histories of the state professional education organizations in North Carolina. As a master teacher, her impact has been recognized by colleagues and associates at the local, district, and state levels. Among the awards received were: the Outstanding Service Award, given by the Rocky Mount Unit of the North Carolina Teachers Association-Association of Classroom Teachers, 1969; the prestigious Terry Sanford Award for Creativity in Teaching, presented by the North Carolina Association of Educators in 1972, and the Teaching Career and Service to Education Award, given by the Edgecomb County Unit of the North Carolina Association of Educators in 1980.

Paralleling the recognition bestowed upon Jones as an outstanding teacher was the acclaim she commanded in elective and appointive professional offices at state, regional and national levels.

The achievements that Jones garnered were not limited to professional involvement. She was widely recognized for her participation in the civic and religious activities in her community. These recognitions and their awards have included: Woman of the Year, Rocky Mount BPW League, Incorporated, 1969; Civic and Religious Worker and Exemplary Teacher, Zeta Phi Beta Sorority, 1972, and Citizen of the Year, Omega Psi Phi Fraternity, 1974.