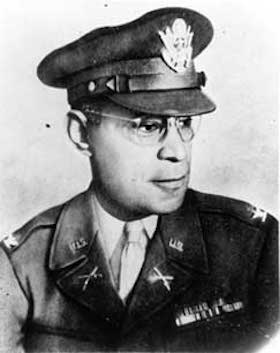 Richard Jones was a decorated military leader, serving in both World Wars I and II, and an early United States Ambassador.

Born Richard Lee Jones on December 21, 1893, in Albany, Georgia, Jones studied at the University of Cincinnati in Ohio, where he received a Bachelor’s of Science (circa 1914). He then studied law at the University of Illinois until the outbreak of World War I, when he enlisted in the U.S. Army.  He served in the 317th Engineer Battalion and as a lieutenant in the Military Police (1917-1919).

After World War I, Jones spent time in Louisville, Kentucky where he helped establish the First Standard Bank (1921), one of the first African American banks in Kentucky. In 1922, he moved to Chicago, Illinois, where he worked for several newspapers including the Chicago Defender and the Chicago Bee (1922-1927).

In 1936, Jones once again served in the military, joining the Service Company, 8th Illinois Infantry Regiment, which was later converted into the 184th Field Artillery. During World War II, Jones became a major (Infantry) in the United States Army (1942-1946).  During the war he was awarded a Legion of Merit medal.  Jones was later promoted to colonel in the Illinois National Guard and was responsible for organizing the 178th Regimental Combat Team of the Guard in Chicago (1947).  He retired from the Illinois National Guard as a Brigadier General in 1953.

General Jones made his transition from military officer to diplomat in 1954 when he began work in Liberia as Director of the U.S. Operations Mission. In 1955, President Dwight Eisenhower appointed Jones to be U.S. Ambassador to Liberia, and he presented his credentials to the Liberian President William V.S. Tubman in Monrovia on June 24, just two days after a failed assassination attempt on President Tubman’s life. In addition to his ambassadorial role, Jones also served as an Alternate Delegate of the U.S. to the United Nations.

Ambassador Jones spent much of his time in Liberia leading U.S. efforts to combat communist advances in the country orchestrated by the Soviet Union and “Red” China. Both nations were actively pressuring Liberia to engage with them diplomatically, and the priority of the United States was to halt such advances. Ambassador Jones actively lobbied President Tubman, and played a vital role in keeping the communist nations at arm’s length of Liberia and the rest of West Africa. Ambassador Jones served in Liberia until 1959.

Ambassador Jones left Liberia in 1959 and resumed private life in Chicago. He received numerous honors, including becoming the first Illinois Guardsman to have a National Guard Armory named after him. Originally called the Washington Park Armory, in October 1970 the Armory was rededicated as the General Richard L. Jones Armory. In addition to this honor, Chicago Mayor Richard J. Daley proclaimed October 17 as General Richard L. Jones Day.