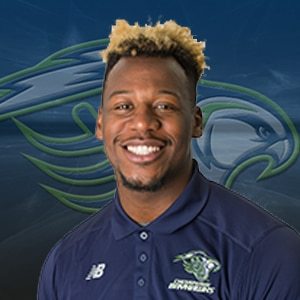 Born in Rockville Centre, New York, Myles Jones began playing lacrosse in 2006 on his 6th grade team as a defender.  He also played football in his youth and was quarterback of his high school team, Walt Whitman.  In school, Jones was constantly critiqued by his African American friends about why he was participating in a “White Sport.”

At 6’5”, Jones’ size helped him excel in athletics. Jones was outstandingly successful in high school and graduated in 2011.  He attended Salisbury School, a private, all-boys college-preparatory school in Salisbury, Connecticut, for a post-graduate year. Throughout high school, Jones was among the top 10 recruits for the country and was the eight best post-graduate recruit.  His skills allowed him to be recruited by Duke University in 2013.

Jones was a trailblazer in the realm of Collegiate Lacrosse.  Of the 3,100 athletes in the NCAA, Jones was one of the 2.83% that were black.  His freshman year he played in 18 of the 21 games and started at midfield for five of them.  He played twice in the 2103 NCAA Tournament. Once in the double overtime win versus Loyola and once in the National Championship game against Syracuse.  Duke won the game over Syracuse and become National Champions for the second time in school history.

In his sophomore year (2014), Jones played in all 20 games for the Blue Devils and started, in the midfield line, for 16 of them. Jones led his team through the NCAA tournament again scoring three goals and five assists in the first round against The Air Force Academy.  He tallied two goals in both the semi-final game versus the University of Denver and in the 2014 National Championship game versus Notre Dame crowning him a two-time National Champion.

In his junior year (2015), Jones started all 18 games in the midfield.  He led the NCAA midfielders in scoring and fourth in points per game.  He became the top scoring midfielder in Duke history, and he had nine hat tricks, which consists of three or more goals in a game, during the season.  He was given the Donald MacLaughlin Jr. Award for nation’s best midfielder in 2015.

In his senior year (2016), Jones was the NCAA top midfielder and the ACC Offensive Player of the year.  He earned the Duke midfield record for career points with 231 and became the first Midfielder in NCAA history to obtain 100 goals and 100 assists.  His achievements earned him the spot at number one for the 2016 Major League Lacrosse draft where he was taken by the Atlanta Blaze in Georgia. In the summer of 2016, Jones received a sponsorship from Adidas and in 2017 he was traded to the Chesapeake Bayhawks and currently plays for them.