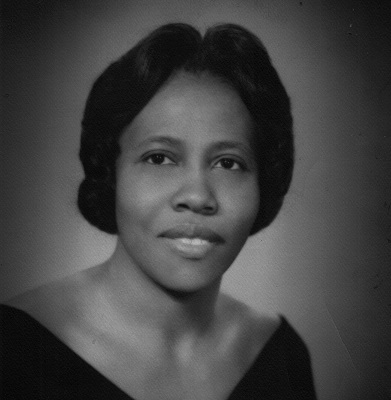 Josephine Ebaugh Jones was a community activist and may also have been the first black woman in management at a Fortune 500 company. Born July 30, 1920, in Cross Hill, South Carolina, to sharecroppers Anna Nance and Scott Ebaugh, Josephine arrived in New York City, New York in 1946 to cook in private homes.

Frustrated with employment that lacked set work hours and Social Security benefits, Josephine, in 1951, went to Taylor Maid, a temporary agency that supplied maids and cooks to apartments throughout the city.

By 1952, she was married to Len Jones but the couple separated in 1953. Before the separation, the couple had a baby named Wendy. The agency asked Jones to fill a two-week vacancy in the employees’ cafeteria at Standard Brands, which produced Chase & Sanborn Coffee and Royal Gelatin, among other brands. When she initially refused Taylor Maid’s request because she couldn’t leave her daughter, the company hired a babysitter for Jones.

The two-week assignment lasted 31 years. Jones’s first suggestions transformed the cafeteria into a place that made light lunches in-house instead of ordering from a vendor.  She earned a dietitian’s certificate in 1966 from the now-defunct New York Institute of Dietetics. In 1967, Jones became the first black food services manager at Standard Brands, serving nearly 300 people daily.

In 1974 Jones took a New York University (NYU) course: “How to Buy a Brownstone,” the next year she handed her notes to her daughter, Wendy, by then a recent Yale graduate, to “find us a house!” In 1976, Jones bought a Harlem brownstone built in 1887.

Once in their new residence, Jones organized residents to assist in block-wide clean ups. She also headed a Civilian Block Patrol in the 1990s that alerted police to illegal drug activity.

Jones participated in unsuccessful protests, along with Michael Henry Adams, an architectural historian and then-president of the Upper Manhattan Society for Progress through Preservation, and other residents, to preserve historic Harlem. Through her efforts Abyssinian Development Corporation, in 2002, established—on the former site of the legendary Smalls’ Paradise night club—the Thurgood Marshall Academy, a select public middle and high school with an International House of Pancakes in the basement.

Jones’s brownstone’s history and an interview were included in the architectural history Harlem: Lost and Found by Michael Henry Adams, published in 2001. Jones and her brownstone also appeared in the 2003-2004 Museum of the City of New York’s “Harlem: Lost and Found” exhibit curated by Mr. Adams.  Jones was also interviewed as part of George C. Wolfe’s Harlem Song, a musical depicting Harlem’s history in song, dance, and film, which opened at the Apollo in 2002.

Josephine Ebaugh Jones died December 10, 2017, in a New Jersey assisted living near her daughter’s family.  She donated her body to NYU medical school. She was 97 years old at the time of her death.