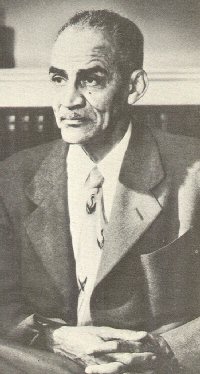 Eugene Kinkle Jones was one of the seven founders or Jewels of Alpha Phi Alpha Fraternity and Executive Director of the National Urban League during its early formative period.  Jones was born in 1885 in Richmond, Virginia.  His father Joseph was a former slave, but his mother Rosa was born free.  Jones attended Wayland Academy, a high school arm of Virginia Union University where his father Joseph Jones was a professor and his mother Rosa was a teacher.  Upon graduation from high school, Jones entered Virginia Union, earning an undergraduate degree in 1905.

Jones then enrolled in graduate school at Cornell University in 1906 at the age of 21, at first majoring in engineering but later transferring to sociology.  While at Cornell he was one of seven founders of Alpha Phi Alpha Fraternity, the first black Greek letter organization founded in 1906.  Jones was instrumental in pushing the other founders toward creating a fraternity.  He graduated from Cornell in 1908 with an M.A. in sociology.

Jones then taught at the University of Louisville from 1908 to 1909 and then was a high school instructor at Louisville High School from 1909 to 1911. Jones married Blanche Rubie Watson in 1909 and the couple had two children.

In 1911, Jones began working as the first field secretary for the newly formed National Urban League (NUL).  In 1917 Jones was appointed as Executive Secretary of NUL and led the organization until his retirement in 1941. As Executive Secretary he led a campaign to undermine the barriers to black employment.  This campaign often included boycotts against firms that refused to employ African American workers.  Jones also worked to expand vocational opportunities for young African Americans and sought a greater role for blacks in previously segregated labor unions.

In 1923, Jones helped to launch Opportunity: Journal of Negro Life magazine with Charles Spurgeon Johnson.  By that date he had helped the Urban League expand to forty branches nationwide.  In 1933, Jones he took a leave of absence from the NUL and accepted a position at the Department of Commerce as an advisor of Negro Affairs, a post he held until 1937.  While in that position, Jones became a member of the President Franklin Roosevelt’s Black Kitchen Cabinet, a group of a dozen high ranking government officials who advised the President about matter of particular importance to African Americans.  The leader of the Cabinet was Mary McLeod Bethune who worked in the National Youth Administration.

Jones was awarded an honorary degree from Virginia Union University in 1924. Eugene Kinkle Jones died at his home in Queens, New York in 1954. He was 69.