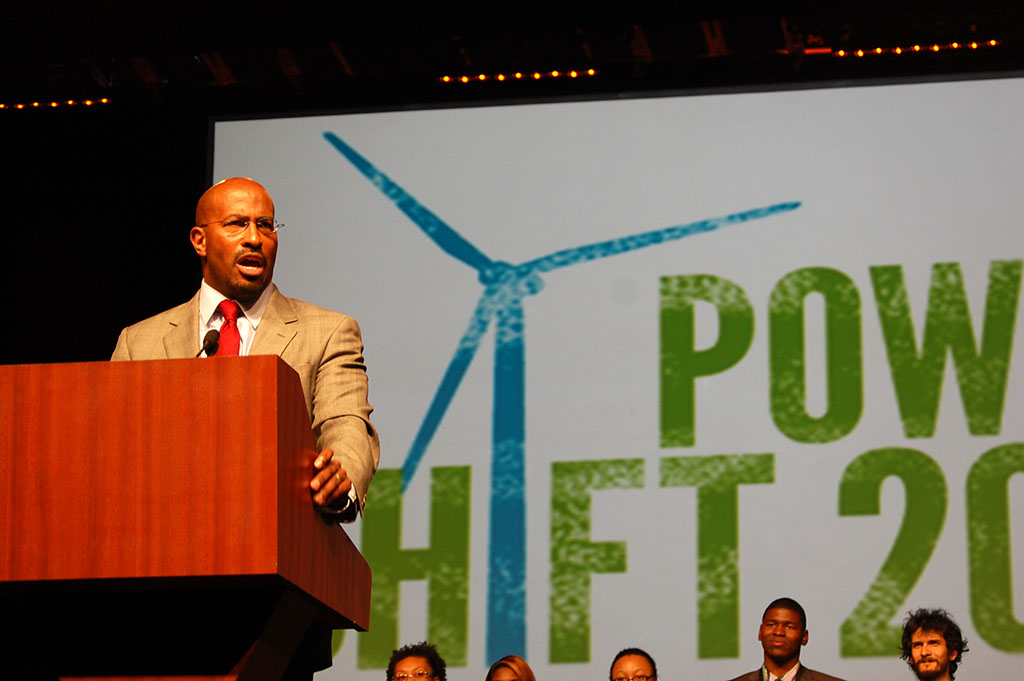 Anthony “Van” Jones is a social-environmental activist and the Obama administration’s former “Green Czar.” He was born in 1968 in Jackson, Tennessee. His mother and father were a high school teacher and junior-high principal respectively. While growing up, Jones was a stereotypical “geek,” going so far as to pretend that his action figures were running public offices. Jones attended the University of Tennessee at Martin where he majored in communications and political science. It was during his freshman year in UT-Martin that Jones chose for himself the nickname “Van.” In 1990 Jones enrolled at Yale Law School.

After graduating in 1993, Jones moved to San Francisco. There he became a community organizer and set up the Bay Area organizations, PoliceWatch and the Ella Baker Center for Human Rights in 1996, both intended to combat police abuse. Jones also involved himself and his organization in the campaign to reform California’s juvenile detention system including the fight against the construction of a huge new juvenile detention facility in Dublin, California.

Due in part to his friendship with environmental activist Julia Butterfly Hill, Jones’s activism began to take on an environmental aspect. In September 2007, Jones formed the advocacy group, Green for All, which was instrumental in the passage of the Green Jobs Act of 2007 as incorporated with the Energy Independence and Security Act.  This measure provided $125 million training for environmentally friendly jobs including funds intended for low-income trainees. In 2008 he published The Green Collar Economy: How One Solution Can Fix Our Two Biggest Problems. In it, he further espouses his belief that both poverty and global warming can be combated with the creation of green jobs.

Jones was appointed a special advisor on green jobs by President Barack Obama in March 2009. He was given the responsibility of coordinating government agencies to facilitate the creation of green jobs, a responsibility which earned him the informal “czar” moniker. Jones’s tenure was cut short when Fox News host Glenn Beck revealed that Jones had signed a petition in 2004 asking for an investigation into whether the Bush administration had facilitated the 9/11 attacks.  This revelation escalated into a public relations debacle for the administration and Jones resigned in September 2009.