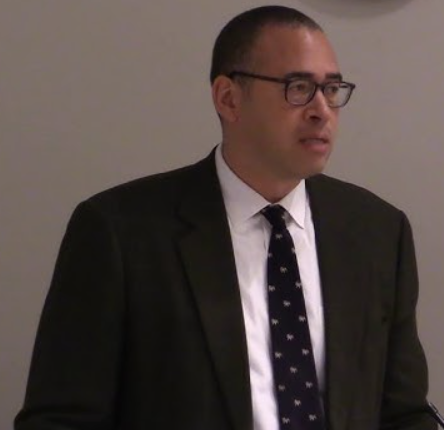 Rutgers University President Jonathan S. Holloway was born July 26, 1967 in Honolulu, Hawaii, the son of an Air Force lieutenant colonel Dr. Wendell Mondoza Holloway and preschool and elementary school teacher Kay Trent Holloway. He grew up mainly in Montgomery, Alabama where his father was later stationed. Holloway attended Stanford University where he played linebacker on the football team with future U.S. Senator Cory Booker and earned his bachelor’s degree in American studies, with honors, in 1989. Holloway next obtained two master’s degrees in history at Yale University. In 1995 his Ph.D. thesis, “Confronting the Veil: New Deal African-American Intellectuals and the Evolution of a Radical Voice,” was accepted at Yale.

Holloway’s first faculty appointment was in the Ethnic Studies department at the University of California at San Diego in 1994. In 1999 he returned to Yale as an associate professor of history; was promoted to full professor in 2004; was master of Calhoun College, and became Dean of Yale College in 2014. In 2015 he was elevated to Edmund S. Morgan Professor of History & African American Studies.

The author of numerous conference papers and published articles, his books as sole author are Confronting the Veil: Abram Harris, Jr., E. Franklin Frazier, and Ralph Bunche, 1919-1941 (University of North Carolina Press, 2002) and Jim Crow Wisdom: Memory and Identity in Black America Since 1940 (University of North Carolina Press, 2013); as editor A Brief and Tentative Analysis of Negro Leadership (New York University Press, 2005), Black Scholars on the Line: Race, Social Science, and American Thought in the Twentieth Century (University of Notre Dame Press, 2007), and an edition of W. E. B. Du Bois’s The Souls of Black Folk (Yale University Press, 2015).

In 2017, Holloway became Provost and Professor of African American Studies at Northwestern University in Evanston, Illinois. On January 21, 2020 it was announced he had agreed to assume the presidency of Rutgers University, leading its 70,000 students and 23,000 employees on four campuses. Holloway is the school’s 21st president and the first person of color to take the helm in its 254-year history.

Holloway is an elected member of the American Academy of Arts and is on the board of the Organization of American Historians. His honorary degrees are from Dartmouth College, Carnegie Mellon University, Southwestern University, Clark University, University of Cincinnati, Rutgers University-Newark, and Concordia College. In late April 2020 he was put on the Governor’s Restart and Recovery Commission to help plan for reopening following New Jersey’s COVID-19 shutdown. A Democrat and Methodist, Holloway married his high school sweetheart, former actress and singer, Aisling Colón, in 1998. They have a son, Ellison, and daughter, Emerson Kay.