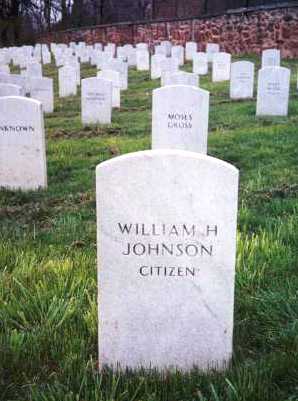 William Henry Johnson served as the personal valet to Abraham Lincoln.  Johnson was born around 1835; however, his exact date of birth, parentage, and birthplace remain unknown.  He began working for the Lincoln family in Springfield, Illinois as a barber and valet in 1860 and accompanied Lincoln to Washington, D.C.

In March 1861, Johnson was placed on the executive payroll as a fireman, but quickly experienced harsh treatment from fellow White House servants.  Traditionally, lighter-skinned African American White House servants received preferential treatment and responsibilities.  Johnson, who had a darker complexion, was persistently plagued by this prejudice despite his established relationship with Lincoln and his previous employ for the Lincoln family.  As a result of his mistreatment, Lincoln made several attempts to obtain employment for Johnson beyond the White House.  First, Lincoln requested an appointment within the Department of the Navy from Secretary of the Navy Gideon Welles.  Johnson’s employ with the Navy was terminated for reasons unknown; however, Lincoln eventually secured a messenger post for him at the Treasury Department.  In November 1863, Johnson accompanied Lincoln to Gettysburg, Pennsylvania, for the delivery of the Gettysburg Address.  During their return in January 1864, Lincoln fell ill with smallpox and Johnson nursed him, restoring his health.  During this period Johnson also contracted the disease and died in Washington, D.C. on January 28, 1864.

President Lincoln was responsible for the burial arrangements for William Henry Johnson; however, the exact burial location is unknown.  It is widely suspected that Johnson is buried in grave 3346, Section 27 of Arlington National Cemetery.  Section 27 contains the graves of Civil War soldiers, but also a significant number of freedmen and women that resided in the District of Columbia.  Johnson’s suspected grave is marked with a headstone bearing his name and the title “citizen” but no dates of birth or death were recorded on the stone.

Many historians dispute this assignment of Johnson’s final resting place for three reasons: first, African Americans who succumbed to smallpox were typically buried in Columbian Harmony Cemetery.  Second, the death dates of William H. Johnson do not coincide with that of the man buried at Arlington.  Finally, Johnson died approximately four months prior to the opening of Arlington National Cemetery and the admittance of African-American burials.