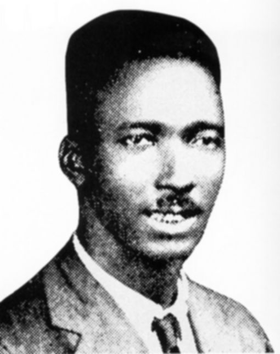 Tommy Johnson is one of the most exemplary of all the Delta bluesmen. Though he recorded only fourteen titles between 1928 and 1930, almost all of these compositions became classics: for example “Big Road Blues,” “Cool Drink of Water,” and “Slidin’ Delta.”  One of them, “Canned Heat,” gave its name to “Canned Heat,” the seminal blues-rock band of the 1960s.  Johnson’s guitar style (inspired by Charlie Patton) and his way of singing influenced many artists: Howlin’ Wolf, Robert Nighthawk, Muddy Waters, and many others.

Tommy Johnson was born on George Miller’s plantation, near Terry, Mississippi, 20 miles southwest of Jackson.  Tommy and his family moved to Crystal Springs around 1910. The Johnsons were a musical family. Tommy’s uncle and brothers, Magar and LeDell, played guitar while others in the family played in a brass band. LeDell taught Tommy how to play guitar. By 1914 the Johnson brothers were adding to their sharecropping income by playing parties around Crystal Springs.

In 1916 Tommy married Maggie Bidwell and moved to Webb Jenning’s plantation in Drew, Mississippi close to Dockery’s Plantation.  Although Johnson would have several wives it was Maggie Bidwell who was immortalized in Johnson’s composition, “Maggie Campbell’s Blues.” Johnson soon fell under the influence of Dockery resident Charlie Patton and local guitarists Willie Brown and Dick Banston.  Johnson lived in Drew for about a year learning the intricacies of Delta blues before hitting the hobo road to Arkansas, Louisiana, and Mississippi.  In 1920 Johnson, now an alcoholic, moved back to Crystal Springs and renewed his partnership with Magar and LeDell.  During the early 1920s he performed with Charlie Patton in Greenwood and nearby Moorehead.

Johnson cut his first sides with guitarist Charlie McCoy in February 1928 at Memphis Auditorium for the Victor label, with a second session in August of that year. It was this session that produced the notorious “Canned Heat Blues” in which Johnson admitted to drinking Sterno to satisfy his alcohol craving. Alcoholism was referenced again in “Alcohol and Jake Blues” cut during his final recording session for Paramount in December 1929.

Johnson’s records were hits in the South, especially the evocative “Big Road Blues.”  For a while Johnson led the life of a star. To enhance his fame, Johnson adopted a sinister persona similar to St. Louis bluesman Peetie Wheatstraw.  His brother LaDell claimed that Tommy had made a pact with the Devil at the crossroads, a story more famously attributed to Robert Johnson, no relation, though it should be remembered that Robert Johnson came later.

In 1930 Johnson returned to Mississippi. Although very unstable and unable to build his career he nonetheless remained a popular performer in the Jackson area through the 1940s.  He was renowned for “clowning” with his guitar, probably borrowed from Charlie Patton. Even after his death he was remembered for riding his guitar like a mule, playing behind his head, and other acrobatics that eventually found there way to Jimi Hendrix and Stevie Ray Vaughan.

Tommy Johnson died of a heart attack after playing a party on November 1, 1956. He is buried in the Warm Springs Methodist Church cemetery in Crystal Springs, Mississippi.

Gerard Herzhaft, Encyclopedia of the Blues (Fayetteville: University of
Arkansas Press, 1992); Trail of the Hellhound, Delta Blues in the Lower
Mississippi Valley –
http://www.cr.nps.gov/delta/blues/people/tommy_johnson.htm