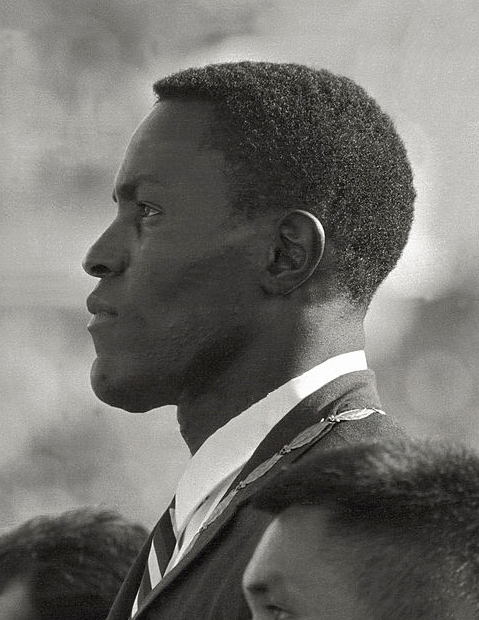 American Olympic athlete Rafer Johnson was born on August 18, 1935 in Hillsboro, Texas to parents Lewis Johnson and Alma Gibson Johnson. When he was around nine years old, the family moved from Texas to Kingsburg, California. He attended Kingsburg High School where he was part of the football, basketball, baseball, and track teams. He was also elected student body president.

Johnson at completed his first decathlon in 1954 as a sophomore at the University of California, Los Angeles (UCLA). He made his mark in athletics when he won a gold medal in the decathlon in the 1960 Olympic Games in Rome, Italy. At the event, Johnson had his best performance at pole vault.  The 1500-meter race was the final race that would decide who won the entire event; Johnson ran a personal best of 4 minutes, 49.7 seconds and finished only 1.2 seconds behind Yang Chuan-Kwang, also known as C.K. Yang, of China. Johnson won the gold medal.

After graduating from UCLA in 1959 Johnson got into sports announcing for a time, helping to call the 1964 Olympics from Tokyo, Japan and working for a Los Angeles television station, but he quit the latter to work on the presidential campaign of Robert F. Kennedy in 1968. Johnson also had a brief acting career, appearing in the 1989 James Bond film License to Kill as a DEA agent.

Rafer Johnson, along with a small group of volunteers, founded Special Olympics California in 1968 by conducting a competition at the Los Angeles Memorial Coliseum for 900 individuals with intellectual disabilities. Because of his influence, the UCLA campus hosted practices, meets, and state-wide competitions.  As of 2015, Johnson has spent forty-seven years working with the Special Olympics at UCLA.

As a tribute to his stellar performance in the 1960 Olympics, Rafer Johnson was chosen to ignite the Olympic Flame during the opening ceremonies of the 1984 Summer Olympics in Los Angeles. Johnson also won a number of other awards and accolades.  In 1994, he was elected into the first class of the World Sports Humanitarian Hall of Fame. In 1998, he was named one of ESPN’s 100 Greatest North American Athletes of the 20th Century. In 2006, the NCAA named him one of the 100 Most Influential Student Athletes of the past 100 years.

On December 18, 1971, Johnson married Elizabeth “Betsy” Thorsen, a middle school teacher in Orange County, California. The couple had two children: Jennifer, born in 1973; and Joshua, born in 1975. The family moved to Sherman Oaks, California, in 1973.

On August 25, 2009, California Governor Arnold Schwarzenegger and California First Lady Maria Shriver announced that Johnson would be one of thirteen California Hall of Fame inductees in the California State Museum’s yearlong exhibit. The induction ceremony was held on December 1, 2009, in Sacramento, California. In 2010, Johnson received the Fernando Award for Civic Accomplishment from the Fernando Foundation and in 2011, he was inducted into the Bakersfield City School District Hall of Fame.  In November 2014, Johnson received the Athletes in Excellence Award from the Foundation for Global Sports development, in recognition of his community service efforts and work with youth.  Two years later, he was inducted into the Texas Track and Field Coaches Hall of Fame, class of 2016.

On Wednesday, December 2, 2020, Johnson passed away in his home in the Sherman Oaks section of Los Angeles, California. He is survived by his wife, children, and grandchildren.