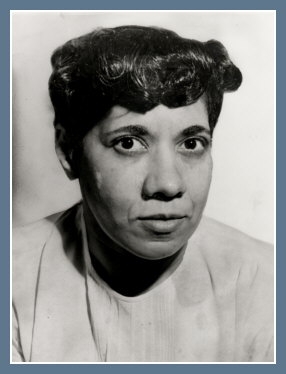 Social activist and black labor leader Nellie Stone Johnson was born Nellie Saunders Allen in Lakeville, Minnesota in 1905, the eldest daughter of an activist farmer, William R. Allen and a schoolteacher, Gladys Allen.  As a child, Nellie worked on her family’s farm near Hinckley, Minnesota.  On her way to and from school, she distributed flyers for the Non-Partisan League, a radical rural organization of which her father was a member.

When she was 17, she left the farm for Minneapolis, Minnesota, where she finished high school through the GED program at the University of Minnesota in 1925.  She attended but did not graduate from the University of Wisconsin.  In 1931, Allen married Clyde Stone, an auto mechanic.

During the Great Depression Stone worked for the Minneapolis Athletic Club.  Concerned about a pay cut food workers received in 1935, she helped found Local 665 of the Hotel and Restaurant International Union, of which she would become Vice-President.  While with the union Stone helped to start the first health and welfare program for food workers.  She was also the first woman to serve as vice-president of the Minnesota Culinary Council.

By the late 1930s Stone was one of the most influential forces in the civil rights and labor movements in Minnesota.  She was active with the Minneapolis National Association for the Advancement of Colored People (NAACP) and was on the board of Local 665 and several committees.  The activism, however, took a toll on her marriage.  She and Clyde Stone divorced in 1939.  He claimed she fell victim to her single-minded devotion to her political commitments.

In 1945, Johnson won a seat on the Minneapolis Library Board, becoming the first African American elected to citywide office.  She served on the Board until 1949.  During that period she became an advisor to Minneapolis mayor Hubert Humphrey. In 1947, she married Lee Johnson, a construction worker, but that marriage also ended quickly in divorce.

When in 1950, the Athletic Club fired Johnson for union organizing while on the job, she responded by opening her own business, Nellie’s Zipper and Shirt Repair Shop.   For over 30 years, she owned and operated Nellie’s Alterations in downtown Minneapolis while continuing to support political and labor causes important to her.

In 1989, the W. Harry Davis Foundation honored Johnson for her service to the community with the “Nellie Stone Johnson Scholarship” which awards financial assistance to members of racial minorities or union members and their families who wish to pursue an education at one of Minnesota’s state colleges and universities.  In 1995, she received an honorary doctoral degree from St. Cloud State University.  Johnson continued to support the causes she believed in even in her 90s.  She died in Minneapolis on April 2, 2002 at the age of 96.