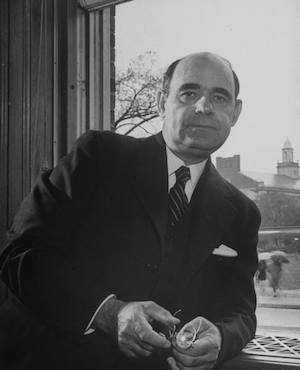 Mordecai Wyatt Johnson, an African American educator, clergyman, administrator, and public speaker, was born on January 4, 1891, in Paris, Tennessee, the son of Reverend Wyatt J. Johnson, a former slave. His father, a minister and laborer, was a stern man who worked at a mill six days a week, twelve hours a day, for forty years. His mother, Carolyn, offset his father’s firmness with patience and nurturing for her only child. Johnson learned through his parents’ example the muscle of self-determination, discipline, scholarship, and integrity.

After completing the elementary grades, Johnson left Paris, Tennessee, to attend Roger Williams University in Nashville. Upon graduating from Atlanta Baptist College (later Morehouse College) in 1911, his oratorical ability won him critical acclaim. In 1922, Johnson delivered a commencement speech during his graduation from Harvard University Divinity School, titled “The Faith of the American Negro.” He also received his Doctor of Divinity from Gammon Theological Seminary Atlanta, Georgia.

On June 26, 1926, at the age of thirty-six, Johnson was unanimously elected the eleventh president of Howard University, becoming the first African American to serve as the permanent head of that institution. Prior to his appointment, Johnson had served as professor of economics and history at Morehouse. He had also served earlier as pastor of the First Baptist Church in Charleston, West Virginia.

During his tenure at Howard, Johnson appointed a number of people who became prominent scholars. They included Alain Locke, who was a Harvard University-trained Ph.D. and the first African American Rhodes Scholar; Ralph Bunche, a professor of political science and later a Nobel laureate; Charles R. Drew, who perfected the use of blood plasma; Percy Julian, a noted chemist; and Sterling Brown, professor of English and noted Harlem Renaissance poet.

His most important appointment was of Charles Hamilton Houston in 1929 as vice-dean and later as dean of the Howard University Law School. While serving as dean, Houston was the architect of the strategy that dismantled the Jim Crow laws and laid the groundwork for the famous Brown v. Board of Education decision in 1954 by the United States Supreme Court.

Johnson raised millions of dollars for new buildings on the Howard campus and for upgrading all of the schools. National honor societies, including Phi Beta Kappa, were established on the campus of Howard during his tenure.

Under the Johnson Administration at Howard University, the number of faculty tripled and faculty salaries doubled, Congressional appropriations increased to $6,000,000 annually, and Howard University’s Freedmen’s Hospital was training half the African American physicians in the country. Perhaps Dr. Johnson’s greatest contribution was the development of the university’s law school as the preeminent source of civil rights attorneys and law professors, including future U.S. Supreme Court Justice, Thurgood Marshall. He also had a profound influence on Martin Luther King Jr.’s commitment to nonviolence resistance.

Mordecai Wyatt Johnson died on September 10, 1976, at the age of eighty-six in Washington, D.C. He left behind a wife, Anna Ethelyn Gardner, and five children.