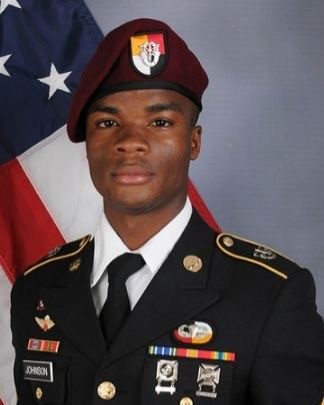 La David Terrence Johnson was an African American Army Sergeant, vehicle mechanic, and father who was killed in the Tongo Tongo Ambush on October 4, 2017 in the West African nation of Niger, alongside three other American soldiers, Staff Sergeants Bryan Black, Jeremiah Johnson, and Dustin Wright. La David Johnson was born on January 2, 1992, in Miami, Florida. He was raised by his parents, Samara Johnson and Terrance McGriff, until 1999 when his mother passed away. Johnson was then sent to live with Richard and Cowanda Johnson.

Johnson enjoyed a comfortable childhood and early adulthood, where he was active in many extracurricular activities, including football. In 2010, he graduated from Miami Carol City Senior High School and later found a job at a local Walmart. There, he was known by friends as the “Wheelie King” due to his frequent antics involving a one-wheeled bicycle. Johnson decided to enlist in the U.S. military in 2012. After basic training, he attended an “Advanced Individual Training” school, where he trained to become a mechanical engineer.

On August 22, 2014, Johnson married Myeshia Manual. They had two children, Ah’Leesya Johnson and La David Johnson Jr., with a third unborn, La’Shee Johnson, on the way. By 2014, Johnson had been promoted to sergeant and recognized with numerous medals and awards, including the Army Achievement Medal, the Army Good Conduct Medal, the Global War on Terrorism Medal, the Army Service Ribbon, and the Army Parachutist Badge.

On August 28, 2017, Sgt. Johnson left for his second deployment with the U.S. Army. He was assigned to the 3rd Special Forces Group (Airborne), and sent to the African nation of Niger, where his group met with Nigerien soldiers to gather information on the whereabouts of a high-ranking Islamic State militant.

This mission led them to the west Nigerien village of Tongo Tongo. On October 4, 2017, the soldiers intended to visit village leaders to gather intelligence. Instead, the villagers stalled the soldiers until they were ambushed by approximately 50 ISIS militants, who were armed with RPGs, mortars, and other heavy munitions. The assault lasted over half an hour until French fighter jets frightened off the remaining ISIS belligerents. The attack resulted in the death of 4 Nigeriens, 4 Americans (including Johnson), and 21 of the 50 assaulters.

Johnson’s body was located two days later, nearly a mile away from the site of the ambush. His hands were tied and a bullet wound was found in the back of his head, leading to the tragic conclusion that Johnson was separated from his group, captured, and executed by the enemy. Additional remains of Johnson’s were found over a month later in the same spot.

A funeral was held for Johnson on October 21, 2017, and more than 1,200 people attended. He is survived by his wife, three children, his father, two grandparents, nine sisters, eight brothers, and numerous extended family members and friends. At the time of his death he was only 25 years old.