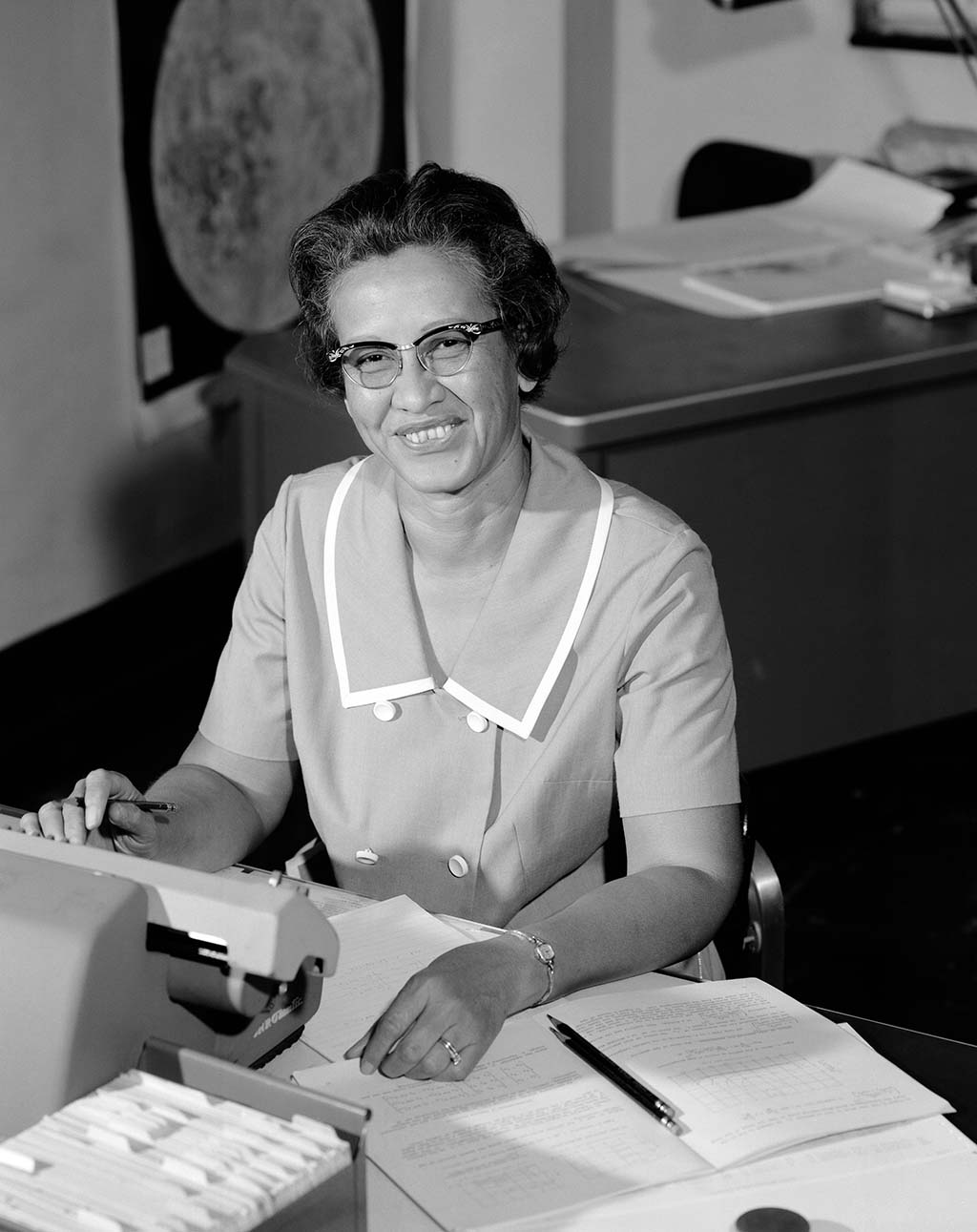 Katherine Goble Johnson, heralded as the first African American woman in Aerospace Engineering, was born on August 26, 1918, in White Sulfur Springs, West Virginia, a city where schooling for “colored” people ended with the eighth grade. In 1937, she graduated summa cum laude (with highest distinction), with a Bachelor of Science in French and Mathematics, from West Virginia State University (formerly West Virginia State College). Twenty years later, married with three children, she transitioned from a teaching career to a coveted research mathematician position, at the National Advisory Committee for Aeronautics (NACA, 1915-1958), the predecessor to the National Aeronautics and Space Administration (NASA, 1958- ). Johnson’s mathematical prowess led her to assist NACA’s all-male team of engineers tasked with finding solutions to America’s space-flight navigation problems.

Born to Joshua and Joylette Coleman, Katherine’s father was a farmer and janitor who quit school after the sixth grade. He moved his family 125 miles from their White Sulfur Springs home to Institute, West Virginia so that Katherine and her older siblings, Charles, Margaret, and Horace, could attend school beyond the eighth grade. Her father returned home to work the farm while her mother, a former teacher, became a domestic worker and stayed with the children in Institute.

Coleman’s love for mathematics helped her excel in school. She skipped grades to start high school at ten, graduating at fourteen. In college, she was mentored by Dr. William Waldron Schieffelin Claytor, the third African American to earn a Ph.D. in mathematics. Claytor designed a special course in analytic geometry for her.

In 1959, when Virginia public schools began desegregating, Johnson was calculating space-flight trajectories in Hampton, Virginia for Project Mercury, America’s first manned space-flight program. Between 1959 and 1963, as the space race between the United States and the Soviet Union intensified, Johnson calculated the trajectory for Alan Shepard, the first American in space, on May 5, 1961. When NASA began using computers, she was asked to verify related calculations for the first American to actually orbit the earth, John Glenn, in 1962. Seven years later, she crafted America’s navigational track for the flight landing the first humans, Neil Armstrong and Buzz Aldrin, on the moon’s surface.

Retiring from NASA in 1986, Johnson’s trailblazing career spanned thirty-three years of achievements, including: the Apollo Group Achievement Award and the NASA Lunar Orbiter Spacecraft and Operations Team Award, given in 1967, an honorary Doctor of Laws from SUNY (State University of New York) Farmingdale in 1998, the West Virginia State College “Outstanding Alumnus of the Year,” in 1999, and an honorary Doctor of Science, awarded by Capitol College of Laurel, Maryland, in 2006.

On November 24, 2015, President Barack Obama awarded Johnson the Presidential Medal of Freedom. In 2016, Johnson was featured in the film Hidden Figures starring Taraji P. Henson, Octavia Spencer, and Janelle Monáe. The film focused on three African American women at NASA who calculated flight trajectories for Project Mercury and Apollo 11 in the 1960s. It documented the careers and contributions of Dorothy Johnson Vaughn, Mary Winston Jackson, and Johnson, who is portrayed by Taraji P. Henson in the film. In 2017, NASA dedicated the Katherine G. Johnson Computational Research Facility in her honor.

Katherine Coleman married her first husband, James Francis Goble, in 1939. They had three daughters, Constance, Joylette, and Katherine, and moved to Newport News, Virginia in 1952. Her husband died from a brain tumor in 1956. In 1959, she married U.S. Army Captain James A. Johnson. Her second husband passed away in 2019. Katherine Johnson passed away on February 24, 2020, at a retirement home in Newport News, Virginia. She was 101 years old. She is survived by two daughters, Joylette Hylick and Katherine Moore, six grandchildren, and eleven great-grand children.