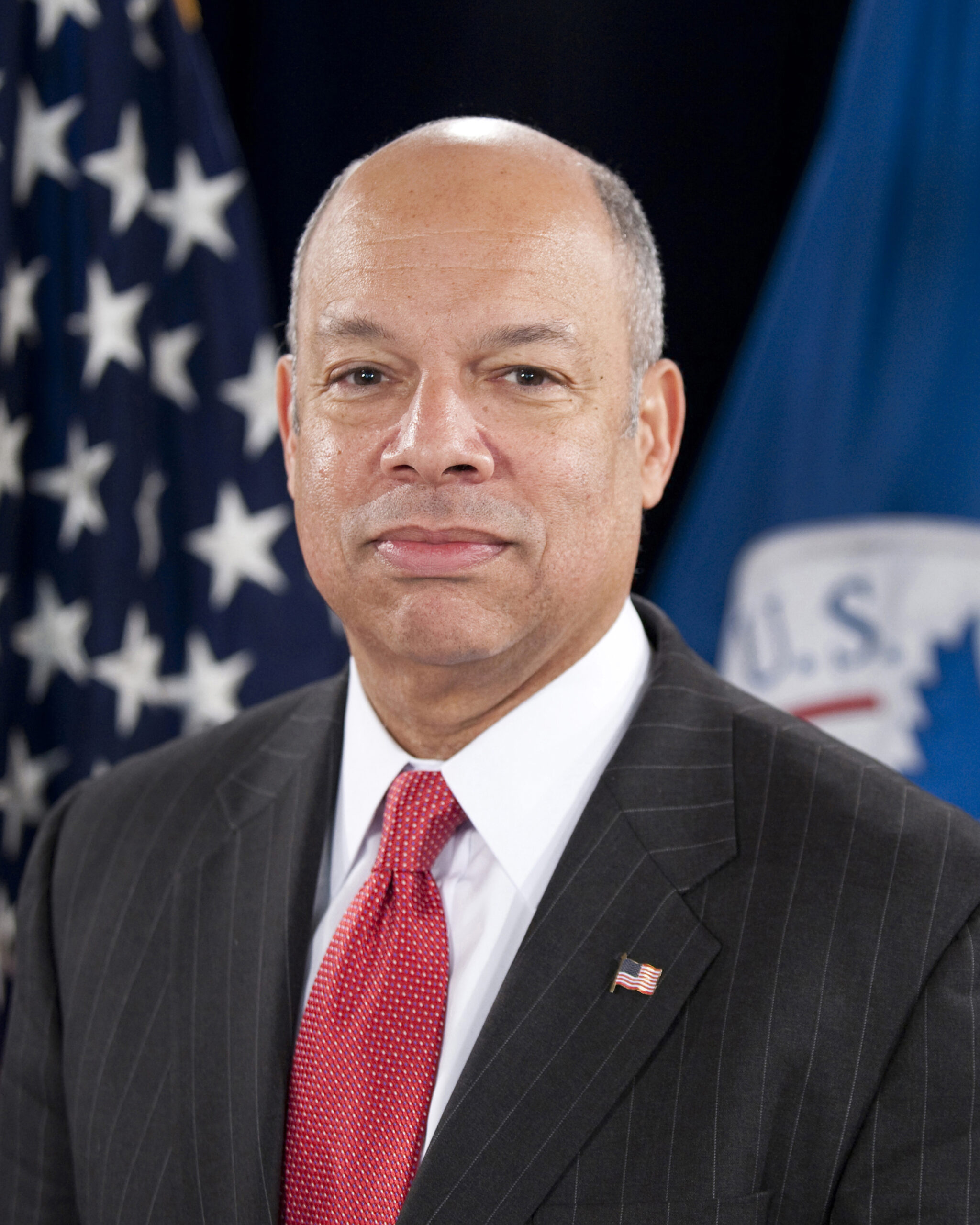 Jeh (pronounced “Jay”) Charles Johnson, a civil and criminal trial lawyer, was the U.S. Secretary of Homeland Security. Johnson received his B.A. from Morehouse College in 1979 and obtained his J.D. from Columbia University in 1982. Nominated by President Barack Obama in October 2013, and subsequently confirmed on December 16, 2013, by the U.S. Senate on a 78–16, vote, Johnson is only the fourth person to hold this cabinet position.

Johnson was born on September 11, 1957 in New York, New York. His parents, Norma E. Johnson and Jeh V. Johnson, are associate director of Planned Parenthood Dutchess-Ulster Inc. in Poughkeepsie and senior lecturer in the art department of Vassar College in Poughkeepsie, respectively. Johnson began his career at the New York City, New York law firm Paul, Weiss, Rifkind, Wharton & Garrison LLP in the mid-1980s and left in 1989 to serve as Assistant U.S. Attorney in the Southern District of New York, a post he held until 1991. Here, Johnson prosecuted public corruption cases. Johnson then returned to Paul, Weiss in 1992.  Two years later in 1994 he was elected the first African American partner at the firm.

In 1998, President Bill Clinton appointed Johnson as the General Counsel to the United States Air Force. As General Counsel, Johnson was the senior legal official in that branch of the military and Governor of Wake Island. His tenure as General Counsel coincided with Operation Allied Force in 1999, the objective of which was to degrade and damage the military and security structure that Yugoslav President Milosevic had used to depopulate and destroy the Albanian majority in Kosovo. For his efforts, Johnson was awarded the Decoration for Exceptional Civilian Service.

After serving as Air Force General Counselor for 27 months, Johnson returned to Paul, Weiss. From 2001 to 2004, he served as chair of the Judiciary Committee of the New York City Bar Association.  Also in 2004, Johnson was elected a Fellow in the prestigious American College of Trial Lawyers.

In February 2009, President Barack Obama named Johnson General Counsel of the Defense Department.  While there Johnson became one of the legal architects of the U.S. military’s current counterterrorism policies. Johnson was part of the senior management team that led the more than 10,000 military and civilian lawyers across the Department. Johnson also helped develop the legal strategies and policies for the detainees at Guantanamo Bay in Cuba.

Johnson was heavily involved in the challenge to the U.S. military policy, “Don’t Ask, Don’t Tell” involving gay and lesbian soldiers, sailors, and marines. In February 2010, President Obama appointed him co-chair of a working group to study the potential impact of a repeal of the policy. In November 2010, following an extensive study, Johnson and Army General Carter Ham produced a 250-page report showing that repeal would have minimal impact on overall military effectiveness. The report, praised as an objective and thorough analysis, was the basis for President Obama’s subsequent repeal of the policy.

As the U.S. Secretary of Homeland Security, Johnson was in charge of overseeing the effort to protect the U.S. and its citizens. Johnson also supervised an agency with approximately 240,000 employees and a budget of nearly 100 billion dollars.  Johnson is a member of Sigma Pi Phi Fraternity.