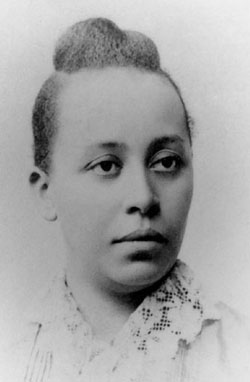 Dr. Halle Tanner Dillon Johnson was the first female physician to pass the Alabama state medical examination and was the first woman physician at Tuskegee Institute.  She was the eldest of nine children born to African Methodist Episcopal bishop Benjamin Tucker Tanner and Sarah Elizabeth Miller in Pittsburgh, Pennsylvania in 1864.  Her brother, Henry Ossawa Tanner, became a noted artist.  Shortly after Halle was born the Tanners moved to Philadelphia where the children were educated.

In the middle 1880s Halle Tanner worked with her father on the AME Church Review.  In 1886 she married Charles E. Dillon and the two moved to Trenton, New Jersey where they had a daughter, Sadie.  Charles Dillon died of an unknown cause and Halle Tanner Dillon moved back to Philadelphia to live with her parents.  Tanner decided to become a physician and enrolled at the Woman’s Medical College of Pennsylvania.  The only African American woman in her class, Tanner graduated with an M.D. and high honors after three years of study in 1891.  While at the college, she learned of a job opportunity as resident physician at Tuskegee Institute.  She contacted Booker T. Washington, the Principal of Tuskegee.  Washington appointed her and helped her prepare for the Alabama state medical examination.

Dr. Tanner Dillon sat for the ten-day examination and passed.  She served at Tuskegee University as a physician, pharmacist, teacher, and ran a private practice for 3 years.  While at Tuskegee she founded a training school for nurses and a dispensary (pharmacy).  In 1894 she married her second husband, Reverend John Quincy Johnson, an aspiring theologian and mathematics professor at Tuskegee Institute.  The couple moved to Nashville where Reverend Johnson pursued a graduate degree in divinity while serving as pastor of Saint Paul’s AME Church.  Dr. Tanner Dillon Johnson, meanwhile, resumed her medical practice.  The couple had three more children but in 1901 Dr. Halle Tanner Dillon Johnson died of complications resulting from childbirth.