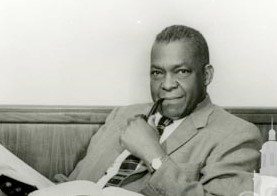 Dr. George Marion Johnson had a distinguished public and professional career that included high administrative positions at universities on two continents as well as governmental positions in agencies which protected the civil rights of all Americans.  Throughout his career, he fought for racial justice and taught students about human rights and the law.

Born in Albuquerque, New Mexico to parents William and Ella Johnson, he grew up in San Bernardino, California. Johnson graduated from UC Berkeley with an A.B. in 1923 and obtained his law degree and LLD from UC Berkeley in 1929.  After graduation, Johnson began his legal career in 1929 as a tax attorney and was the first African Americans hired as California State Assistant Tax Counsel. He returned to UC Berkeley in 1938 to obtain a J.S.D., a doctorate in law degree and became one of the first African Americans in the nation to hold this advanced degree.  He later was recruited as a law professor at Howard University where he taught Contracts, Equity and Personal Property course.

In 1957, Johnson was appointed as a Director of U.S. Commission on Civil Rights. While there, he and the Commission investigated black voter exclusion from Louisiana elections.  Three years later, in 1960, Johnson helped establish the University of Nigeria in the year of its independence from Great Britain. He was named by Nigerian President Dr. Nnamdi Azikiwe, its first Vice-Chancellor (University President) and served that post from 1960 to 1964. During his tenure, the university developed its core curriculum which included Arts, Education, Engineering, Law, Science and Social Studies.

Johnson returned to the United States and served as Professor of Education at Michigan State University from 1968 to 1973. In 1969, he authored a book on Education Law and also a textbook, Michigan Education Law in 1970.  Between 1974 and 1975, he became a Professor of Law at the University of Hawaii and Director of the Preadmission program which ensured minorities succeeded in law school.  He worked for one year at Michigan State University from 1975 to 1976 and returned to Hawaii where he worked until his retirement.

Johnson was married to Evelyn Johnson.  He died in Honolulu in 1987 at the age of 89. He left an endowment of over $500,000 to benefit the University of Hawaii Law School and its students.