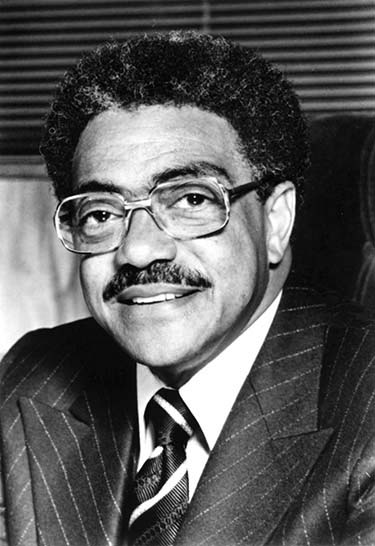 George Ellis Johnson, Sr. was an African American entrepreneur and founder of Johnson Products Company, a hair care firm, and Independence Bank in Chicago, Illinois.  Johnson was born on June 16, 1927 in Richton, Mississippi to Priscilla Johnson.  He is perhaps best known for being the first African American to have his company listed on the American Stock Exchange.

In 1929 when Johnson was two years old, he moved to Chicago, Illinois with his mother after she separated from his father.  He grew up in Chicago, and attended Wendell Phillips High School.  At eight Johnson began working as a shoe shine boy and later held jobs as a bus boy, a pin setter at a bowling alley, and paper boy for the Chicago Herald Tribune.  In 1944 he dropped out of school and accepted a job as a production chemist for the Samuel B. Fuller cosmetics firm.

Johnson remained at Fuller Cosmetics until 1954 when he left to found his own firm, Johnson Products Company.  He and his wife, Joan (Henderson) Johnson, started the company with only $500. Unlike earlier African American cosmetics firms which targeted women, Johnson developed his first products exclusively for male customers.  Johnson Products first success was Ultra Wave Hair Culture, which was a hair relaxer for men.

In 1957, Johnson Products released a new hair straightener specifically for women called Ultra Sheen which, unique among such products, could be applied at home.  Soon Ultra Sheen surpassed Ultra Wave in sales and popularity.  In 1964, Johnson founded Independence Bank in Chicago which by the 1980s had become the largest black-owned bank in the United States.  Independence Bank was sold in 1994.

Also in the late 1960s, sensing the growing popularity of “Afro” style hair with the rise of Black Power as a political philosophy, Johnson developed its most famous product, Afro Sheen.  By the late 1960s Johnson Products became the principal sponsor of the national television dance show, Soul Train. With markets in Africa, the West Indies, and Latin America by the early 1970s, Johnson Products Company had become the largest African American owned corporation in the United States.