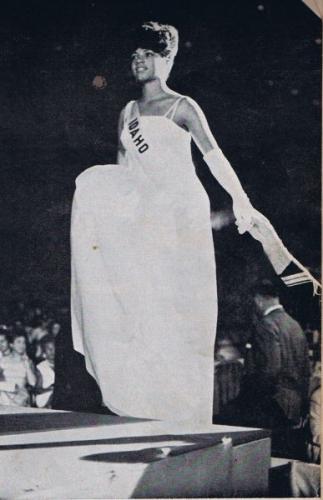 Born in Pocatello, Idaho, on May 9, 1945, Dorthy (spelled without the second “o”) L. Johnson, became a semi-finalist in the 1964 Miss USA pageant after winning the title of “Miss Idaho.” The nineteen year-old was not the first African American to compete in The Miss USA pageant. That distinction goes to Corinne Huff who in 1960 was the alternate for Miss Ohio.  Johnson was the first semi-finalist and the first African American beauty queen to represent the state of Idaho. At the time of her selection the United States was embroiled in racial tension.  Just one month before, the 1964 Civil Rights Act had just been signed and shortly afterwards three civil rights workers were murdered in Mississippi. Tens of thousands of blacks in the South had had yet to win the right to vote.  Thus, Johnson’s remarkable achievement inspired one Time Magazine reporter to dub her “a pretty paradox.”

Painfully shy, Johnson worked as a telephone operator while a student in elementary education at Idaho State University in Pocatello. The youngest of three boys and three girls, she grew up in a well respected and close knit family.  Her parents, Pompie and Nellie Johnson were founding members of Pocatello’s oldest black church, Bethel Baptist.  Pompie had migrated to Pocatello from Georgia and worked as head janitor for the Union Pacific Railroad while Nellie was a homemaker.

Nellie suggested Dorthy enter the pageant to overcome her shyness.  But when the lovely co-ed won the title of “Miss. Idaho,” her father initially refused to allow her to travel to Miami Beach, Florida.  The twelve day pageant had been held there every year since 1952.  Pompie, however, did not want his sheltered daughter exposed to the indignities of Southern racism.  Yet Dorthy faced indignities at home in Pocatello.  Every year the Miss Idaho winners received clothes and airfare from the state or local businesses.  Dorthy received nothing. Recognizing that his daughter would face challenges because of her race in Idaho and across the nation, and with lobbying from Nellie, Pompie relented and surprised his daughter with four perfectly fitting outfits to wear while she competed in Miami.

Treated well in Miami, Dorthy was shocked to learn that the press did not follow the other contestants as they did her.  And she was amused by whites who seemed surprised to find out she spoke fluent English and was not a foreigner.

Dorothy later became an award winning educator. She was a Los Angeles Reading Association’s Teacher of the Year in 1992, listed in Who’s Who Among America’s Teachers and nominated for the Disney Teacher of the Year Award in 2002. Dorthy Johnson has one daughter and is a new grandmother. She and her husband, Robert LeVels, reside in Long Beach, California.