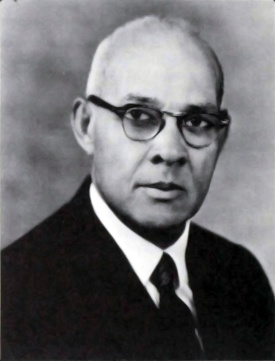 John Warren Davis was the fifth and the longest president of West Virginia State University from 1919 to 1953. He is also known for founding one of the first chapters of the National Association for the Advancement of Colored People (NAACP).

Davis was born in Milledgeville, Georgia, on February 11, 1888, to Robert M. Davis, a merchant, and Katie Mann Davis. Davis’ mother was biracial and when Davis was five, he was left by his parents to be raised by his maternal grandmother. Davis John attended elementary school in Milledgeville from 1894-1901.

In 1903 Davis enrolled in Atlanta Baptist College (now Morehouse College) where he played on the football team and graduated from the institution eleven years later in 1911 with an Honors Bachelor of Arts degree in education. During his time at Atlanta Baptist College he worked as a personal servant for the college president, John Hope, the institution’s first African American president. Hope promoted Davis to position in the college’s business office. Davis was at the college when Black educational leaders such as W.E.B DuBois and Booker T. Washington spoke there. President John Hope encouraged Davis to attend graduate school, which he did from 1911 to 1913 at the University of Chicago.

In 1916, Davis married his first wife, Bessie Rucker, the daughter of a Georgia Reconstruction-era politician Henry Allan Rucker. The couple had two daughters, Constance and Dorothy. After Bessie’s death, Davis in 1932 married Ethel Elizabeth McGee, the Dean of Women at Spelman College. They had one daughter, Caroline.

John W. Davis completed his Ph.D. in Chemistry and Physics in 1913 and became a professor of Chemistry at his alma mater, Atlanta Baptist College. During his time as a professor he helped found Atlanta’s first NAACP chapter with Walter Francis White who eventually became the longtime Executive Director of the Association. From 1917 to 1919, Davis served as the executive secretary at the YMCA (Young Men Christian Association) in Washington, D.C.

On August 20, 1919, 31-year-old Davis was picked to succeed Byrd Prillerman as president of West Virginia College Institute. During Davis’ first ten years as president he expanded the academic curriculum and oversaw the construction of new buildings. In 1927 West Virginia Collegiate Institute became the first African American college accredited by the NCA (North Central Association of Colleges and Schools) due to Davis’s efforts to improve the school. In 1929 West Virginia Collegiate Institute became West Virginia State College. Davis also created the Colored Deaf and Blind extension service for Black students who were visually and hearing impaired so that they could attain college degrees. Often known for selecting promising high school students for admission to the institution, one of his most famous choices was Katherine Jackson who later became the famous African American mathematician who used her critical skills to aid NASA with its early spaceflights in the 1960s.

John Warren Davis was a member of Sigma Pi Phi fraternity and Phi Betta Kappa Honor Society. In his retirement, Davis continued to work for the NAACP as a consultant. Davis died in Institute, West Virginia on July 12, 1980 at the age of 92. John Davis’ legacy continues through West Virginia College where the Fine Arts building is named after the former President.