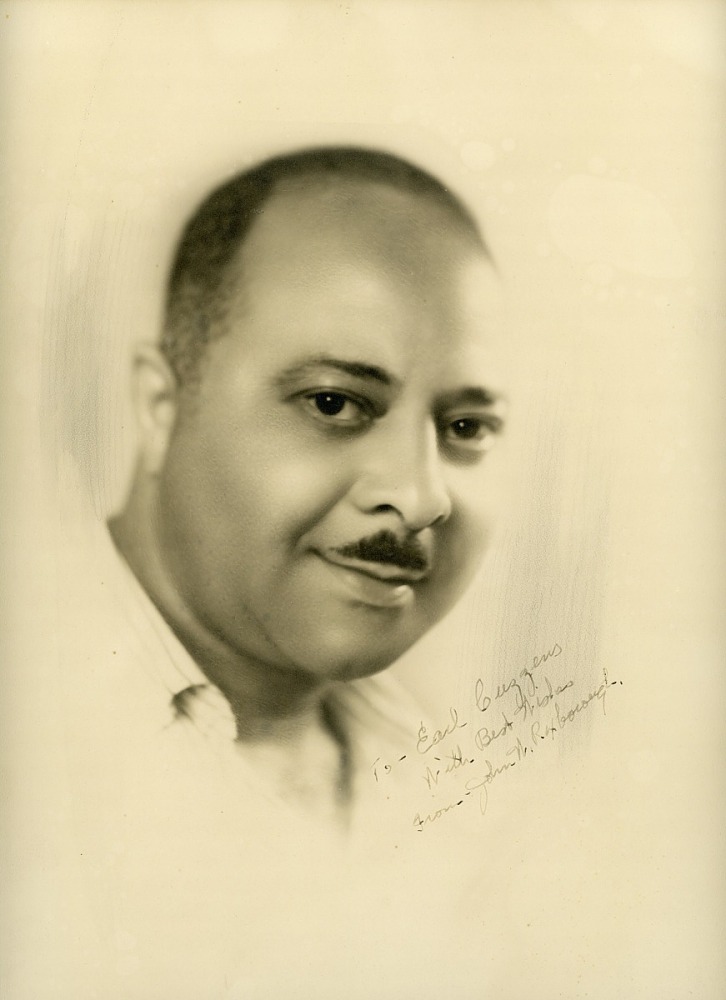 John Roxborough is best known as the manager of Joe Louis, the heavyweight champion of the world from 1937 to 1949. For more than two decades Roxborough served as Louis’ partner, adviser, and mentor. Roxborough, a former basketball player turned professional gambler, often helped youth groups with their athletic programs in Detroit, Michigan in the 1920s, particularly those with interests in baseball, boxing, and basketball, so it was not unusual that he would want to work with young Joe Louis.

Roxborough was born in Detroit on February 21, 1892.  By the time he met Joe Louis in 1931, his brother, Charles Roxborough had been elected Michigan’s first black state senator. Roxborough was running a real estate office in Detroit’s Paradise Valley that served as the front for a numbers operation, while 17 year old Louis was fighting in the Golden Gloves Boxing tournament and training at the Brewster Recreational Center. Roxborough encouraged Louis when he was an amateur and became his manager when he turned professional in 1934. To help develop Louis’ talent, Roxborough hired Jack Blackburn, a boxer himself, to coach the young fighter. He also teamed with Julian Black, a Chicago, Illinois numbers runner, in a business venture that carried over into their joint management of Louis’s boxing career.

Recalling the controversy over Jack Johnson, the first heavyweight champion, the new managers began to craft a public image of respectability for Louis as heavyweight contender and later world champion. To do this they restricted his behavior in and out of the ring.  He was forbidden to appear in photographs with white women or to appear to drink alcoholic beverages.

In 1937, John Roxborough married Wilhelmina Morris just as Louis began his phenomenal rise to fame. However, their 18 years of wedlock ended in divorce in 1954, with no children from the union.

As Louis’s manager, Roxborough paid for Louis’ gloves and equipment, and gave him much of his public wardrobe that promoter the fighter’s image as a well-dress yet soft spoken athlete. On June 22, 1938, the night of what was arguably Louis’ most important fight, the rematch with Max Schmeling who had unexpectedly defeated Louis the year before, Roxborough worked Joe’s corner, helping to devise the strategy that avenged his earlier loss to the German boxer.

While managing Louis from the early 1930s and through 1949, Roxborough was convicted in 1944 and served two-and-a-half years in prison for his numbers operation. Nonetheless, Roxborough, who by this time also owned the Superior Life Insurance Society of Michigan, provided Louis with a lifetime position as vice president and director of youth activities years after his last fight with Rocky Marciano in 1949.

John Roxborough died in Detroit, Michigan on December 1, 1975 at the age of 83. However, less than six years after his death Louis experienced income tax problems and financial difficulties, and underwent a brief stay in a Denver, Colorado psychiatric hospital before his death in 1981.

Roxborough firmly believed that leisure and recreation were significant aspects of the black experience in the United States. Through his very public management of Joe Louis he also helped develop a national audience among African Americans for professional sports that continues to this day.