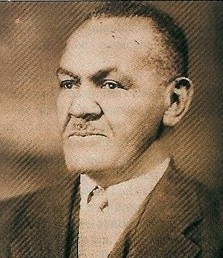 John B (for the Baptist) Stradford was born a free man in Versailles, Kentucky in 1861. His father, J.C. Stradford was a former slave who had been emancipated and was living in Stradford, Ontario (Canada) but who returned to the U.S. and was in Versailles when his son was born. Not much is known about J. B. Stradford’s his early life before his graduation from Oberlin College in 1896, and Indiana Law School in 1899. Stradford was a shrewd businessman. While living in Lawrenceburg, Kentucky, and St. Louis, Missouri, he ran pool halls, bathhouses, shoeshine parlors and boarding houses. Stradford migrated to Indian Territory (now Oklahoma) in 1899 with his wife Augusta, and settled in the newly found town of Tulsa, eventually becoming one of the most prominent individuals in the town.

He got involved in the building of the all-black Greenwood section of Tulsa with another early settler, O.W. Gurley, as they both built fortunes in real estate and rental units. By World War I, Greenwood had become what many called the “Black Wall Street of America,” meaning it was one of the most prosperous concentrations of black businesses of any community in the nation. Its booming economy was based on a large working class of African American men and women who supported numerous businesses.

Stradford also became a civil rights activist for local African Americans. He filed a lawsuit against the St. Louis and San Francisco Railway company for failing to provide proper accommodations for black travelers, and he publicly opposed lynching and many of the new Jim Crow laws enacted when Oklahoma became a state in 1907.

On June 1, 1918 Stradford opened the luxurious fifty-four room Stradford Hotel at 301 N. Greenwood Avenue. It was the largest black owned and operated hotel in Oklahoma and one of the few black-owned hotels in the United States. The Stradford had a dining hall, a gambling room, a saloon, and a large hall for events such as live music. By 1920 Stradford had become the richest black man in Tulsa, owning over fifteen rental properties and an apartment building, along with the hotel.

When the Tulsa Massacre began on June 1, 1921, where an estimated 300 blacks were killed by white rioters, Stradford stood in front of his hotel armed with a rifle until he was overwhelmed by the white mobs that had invaded the community. Eventually the entire black commercial district, all the buildings along a thirty-four-block area on and near Greenwood Avenue, were destroyed including the Stradford Hotel. Although the damage was clearly done by white mobs, Stradford and twenty other black people were indicted for inciting a riot. Stradford’s son, attorney C.F. Stradford posted bail but fearing for his life, Stradford jumped bail and escaped to Independence, Kansas before finally settling in Chicago, Illinois. For the next few years, he and his son fought his extradition to Tulsa.

While in Chicago Stradford formed a group of investors to build a new luxury hotel but the project ran out of money and the building was never completed. He did own a candy store, barbershop and a pool hall but he never duplicated his success in Tulsa. J.B. Stradford died in Chicago on December 22, 1935. In 1996, a Tulsa jury acquitted Stradford of all charges relating to the Tulsa Race Riot.