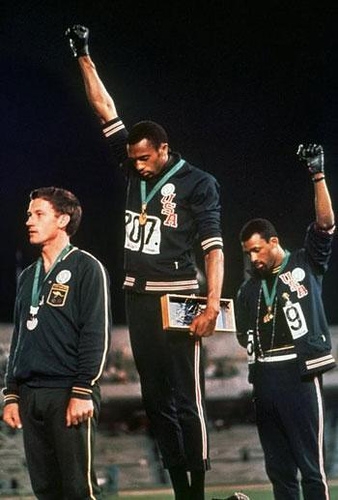 John Carlos is best known for his black-gloved fist salute on the winner’s podium (with Tommie Smith) at the 1968 Summer Olympics in Mexico City. Born on June 5, 1945, in Harlem, New York, Carlos was a promising student-athlete in high school. Following graduation, attended East Texas State University (ETSU) on a track and field scholarship. After a year at ETSU, Carlos transferred to San Jose State University.

Carlos attended San Jose State during the late 1960s at the time of the “revolt of the Black athlete.” This revolt was symbolized by a black student-athlete boycott which forced the university to cancel its opening day football game with the University of Texas at El Paso (UTEP) on September 18, 1967.  At the time, Carlos was a world-class sprinter and member of the United Black Students for Action.

As a track and field athlete, Carlos was not directly affected by the student boycott of the football game.  He continued to successfully compete and was chosen for the United States Olympic team that would participate in the Mexico City Games in 1968.

The Olympic Project for Human Rights (OPHR), organized by former San Jose State athlete Harry Edwards, attempted to persuade black athletes to boycott the Summer Olympics.  However, many black athletes chose to compete, including John Carlos and Tommie Smith, teammates at San Jose State who made it to the finals of the 200-meter dash.  Tommie Smith won the gold medal, and Carlos won the bronze. The men showed their solidarity with the OPHR movement from the winner’s podium, raising black-gloved fists when the American national anthem was played. After shocking the world with their defiant act, Carlos and Smith were suspended from the Olympic Village and given forty-eight hours to return to the United States.  Later, they were banned from amateur athletics and were subjected to death threats. Their protest, however, created an easier path for black athletes to follow in amateur and professional sports. In 1969, the ban was lifted, and Carlos had his best year in track and field in the 100, 200, and 4 x 110-yard relay, leading San Jose State to its first NCAA championship.

After graduating from San Jose State in 1970, Carlos briefly played professional football–with the Philadelphia Eagles in the National Football League and the Montreal Alouettes and Toronto Argonauts in the Canadian Football League. In retirement, he worked for Puma (shoes) and ironically, the United States Olympic Committee.  He worked with the United States Olympic Committee during the 1984 Summer Olympics in Los Angeles. Carlos was also a counselor and track and field coach at Palm Springs High School in California.