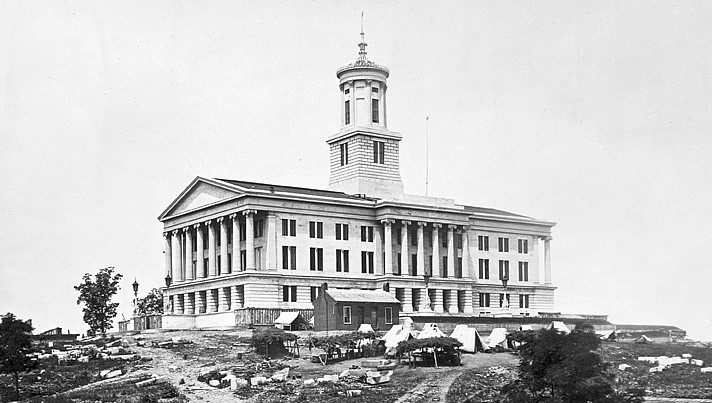 Tennessee State Capitol Building at the End of the Civil War, 1865.

The State of Tennessee enacted 20 Jim Crow laws between 1866 and 1955, including six requiring school segregation, four which outlawed miscegenation, three which segregated railroads, two requiring segregation for public accommodations, and one which mandated segregation on streetcars.  The 1869 law declared that no citizen could be excluded from the University of Tennessee because of race or color but then mandated that instructional facilities for black students be separate from those used by white students.  As of 1954, segregation laws for miscegenation, transportation and public accommodation were still in effect.

1869: Barred school segregation [Statute]
While no citizen of Tennessee could be excluded from attending the University of Tennessee on account of his race or color, “the accommodation and instruction of persons of color shall be separate from those for white persons.”

1870: Miscegenation [Constitution]
Intermarriage prohibited between white persons and Negroes, or descendants of Negro ancestors to the third generation.

1870: Miscegenation [Statute]
Penalty for intermarriage between whites an blacks was labeled a felony, punishable by imprisonment in the penitentiary from one to five years.

1870: Education [Statute]
Schools for white and colored children to be kept separate.

1873: Education [Statute]
“White and colored persons shall not be taught in the same school, but in separate schools under the same general regulations as to management, usefulness and efficiency.”

1875: Public accommodations [Statute]
Hotel keepers, carriers of passengers and keepers of places of amusement have the right to control access and exclude persons as “that of any private person over his private house.”

1881: Railroads [Statute]
Railroad companies required to furnish separate cars for colored passengers who pay first-class rates. Cars to be kept in good repair, and subject to the same rules governing other first-class cars for preventing smoking and obscene language. Penalty: If companies fail to enforce the law required to pay a forfeit of $100, half to be paid to the person suing, the other half to be paid to the state’s school fund.

1885: Public accommodations [Statute]
All well-behaved persons to be admitted to theaters, parks, shows, or other public amusements, but also declared that proprietors had the right to create separate accommodations for whites and Negroes.

1891: Railroads [Statute]
Railways to provide equal but separate accommodations for the white and colored races. Penalty: Railroad companies that failed to comply with law guilty of a misdemeanor and subject to fines from $100 to $500. Conductors could be fined from $25 to $50.

1901: Education [Statute]
Unlawful for any school or college to permit white and colored persons to attend the same school. Penalty: $50 fine, or imprisonment from 30 days to six months, or both.

1905: Streetcars [Statute]
All street cars required to designate a portion of each car for white passengers and also for colored passengers. Required signs to be posted. Special cars could be run for one race exclusively. Penalty: Streetcar companies could be fined $25 for each offense. Passengers who refused to take the proper seat could be fined $25.

1925: Education [Statute]
Separate elementary and high schools to be maintained for white and Negro children.

1932: Race classification [State Code]
Classified “Negro” as any person with any Negro blood.

1955: Health Care [State Code]
Separate buildings for black and white patients in hospitals for the insane.

1955: Miscegenation [State Code]
Prohibited marriage or living together as man and wife between racially mixed persons. Penalty: One to five years imprisonment in county jail, or fine.