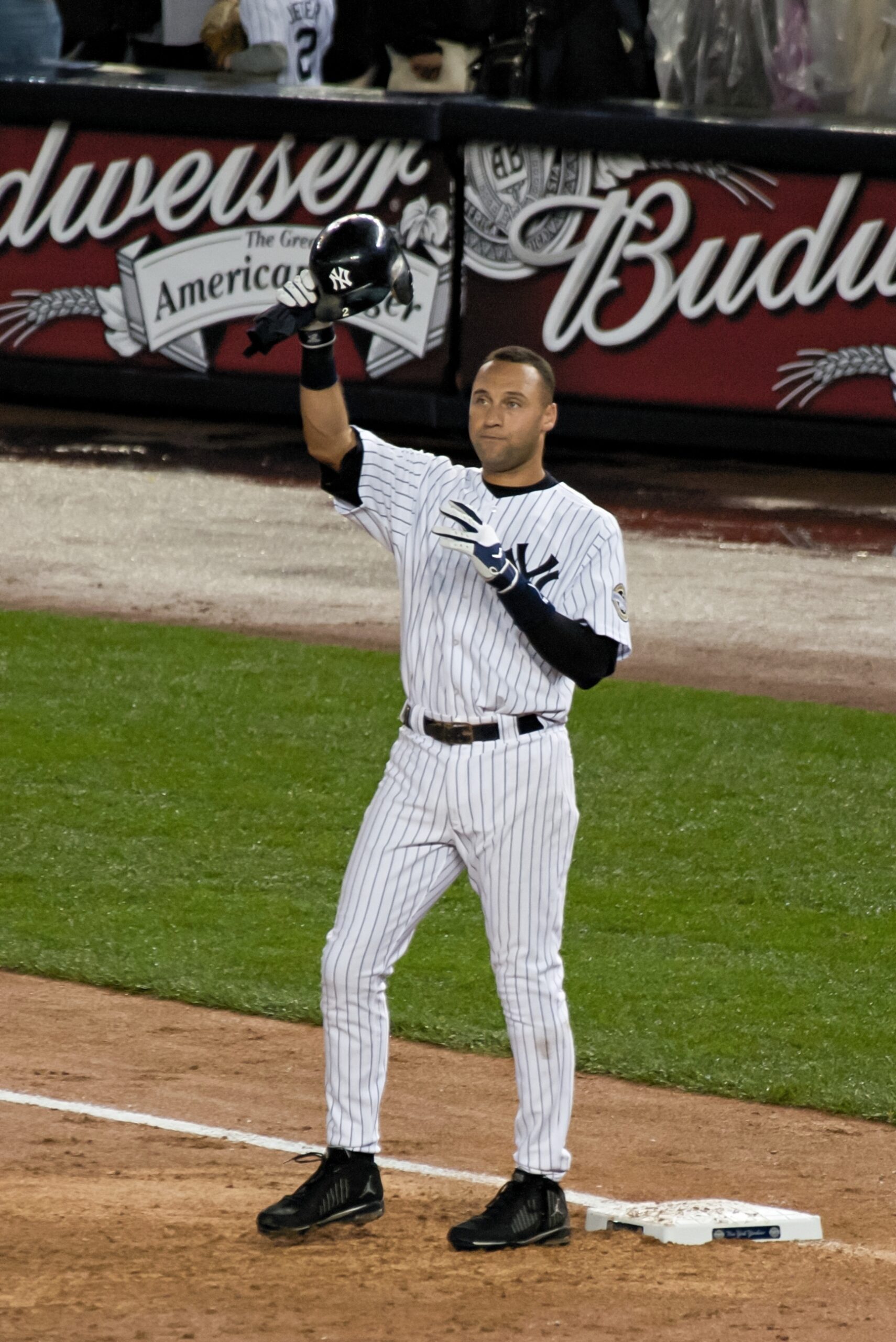 Throughout his 20 seasons in baseball, Derek Jeter established himself as a New York Yankees legend.  Growing up as a Yankee fan and having played his entire career with the franchise, his play was synonymous with the team’s success.  With on-field talent matching his charismatic demeanor, Jeter attracted fans throughout baseball.

Derek Sanderson Jeter was born on June 26, 1974 in Pequannock, New Jersey. Born to a black father and a white mother, Jeter moved to Kalamazoo, Michigan when he was four while his father attended Western Michigan University for his Ph.D. in psychology.  Growing up, Jeter excelled in sports, particularly basketball and baseball.  He played both sports at Kalamazoo Central High School, but would make his mark in baseball where in 1992 he would win national athletic honors such as “Gatorade High School Athlete of the Year” and USA Today’s “High School Player of the Year.”  In his senior year, he batted over .500 and struck out only once the entire season.

After his graduation from high school in 1992, the New York Yankees drafted Jeter sixth overall.  He ascended quickly through the minor leagues and debuted as a New York Yankee in 1995 when the team played the Seattle Mariners.  By 1996, he became the starting shortstop for the Yankees and participated in his first World Series, when the team beat the Atlanta (Georgia) Braves.  He received the American League’s Rookie of the Year Award for the 1996 season.

Over the next decade, Jeter would become part of a dominant Yankee baseball dynasty. The team would win three consecutive World Series in the 1998, 1999, and 2000 seasons, in the last of which Jeter was named World Series MVP.  His accolades also included 14 All Star team selections, one All Star MVP award, and five Golden Glove Awards.  In 2003, the Yankees named him team captain, which would lead to many fans referring to him simply as “The Captain.”

The Yankee’s dominance did not continue into the next decade.  Jeter, however, would be a part of a World Series victory in 2009 over the Philadelphia (Pennsylvania) Phillies.  In 2012, he led the American League in hits and helped his team earn an American League Championship Series berth. He, however, was unable to play after fracturing his ankle.  Jeter announced his retirement from the Yankees and from baseball in 2014 at the age of 40.  He finished his career with the sixth highest total number of hits by any major league player (3,465), and an overall .310 batting average.  In 2017, the Yankees retired his jersey number 2 in his honor.

Off the field, Jeter was known for his grounded status as a celebrity. While having many endorsements and being involved in high profile relationships with pop singer Mariah Carey and actress Minka Kelly, he was also known for his philanthropy.  In 1996, he started the “Turn 2 Foundation” which encouraged community leadership for youth.  He also started a website called “The Players’ Tribune,” where athletes could communicate in first person articles and podcasts with their fans. Jeter married his longtime girlfriend Hannah Davis in 2016. The couple currently reside in Tampa, Florida.