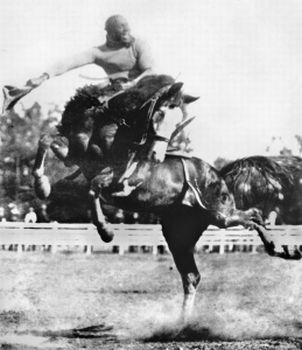 African American cowboy and rodeo rider Jesse Stahl set the standard of performance in saddle bronc riding that continues to this day. Stahl was a topnotch horseman, a first-class gentleman, and a cowboy who was regarded by many who saw his performances as larger than life.

Conflicting sources establish Jesse Stahl’s birthplace as Tennessee, Texas or California sometime between 1879 and 1883.  Nothing is known about his childhood other than he had a brother named Ambrose. Both brothers joined the rodeo circuit but only Jesse went on to fame.

Jesse Stahl is most famous for his performance at the Salinas Rodeo in California in 1912.  Before over 4,000 fans, Stahl stole the show in the rodeo’s classic event of saddle bronc riding on the bronco named Glass Eye. The horse would buck, twist his body 180-degrees midair, and land in the exact opposite direction. Most observers felt that none other than Stahl stood a chance of staying on Glass Eye. He did, and that magnificent ride thrilled fans and cemented Stahl’s name into the annals of rodeo fame. Other stories of Stahl’s exploits have been passed down through oral tradition.

Stahl invented the rodeo technique of “hoolihanding,” literally leaping from a horse onto the back of a 2,000-pound bull, grabbing its horns, overpowering the animal, and rooting it into the ground tethered by its horns. He wowed sellout audiences with his bravery and exceptional performances until hoolihanding was outlawed.

With his reputation growing as one of the great performance riders of the West, Stahl was a contract headliner at rodeo expositions all over the country. His popular “suicide rides” performances, where he and fellow rodeo performer Ty Stokes rode a bucking horse sitting back-to-back, drew huge crowds.

Jesse Stahl retired in 1929 and died in Sacramento, California in 1935.  He is remembered today as a peerless roughrider. He was posthumously inducted into Oklahoma City’s Rodeo Hall of Fame in 1979, only the second black cowboy (after Bill Pickett) to receive that honor.