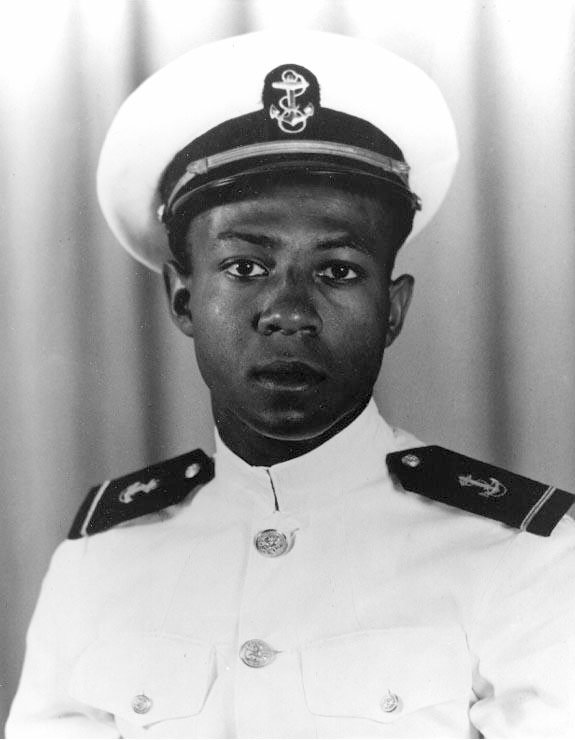 Ensign Jesse Leroy Brown, the first African American to complete flight training in the United States Navy, was also the first African American naval officer killed in the Korean War. Born October 13, 1926 in Hattiesburg, Mississippi, he was one of six children; his father, John Brown, was a sharecropper, and his mother, Alice, was a teacher. In high school, Jesse Brown was a three-sport athlete. He graduated from Hattiesburg’s racially segregated Eureka High School, where he was the salutatorian, in 1944. He studied engineering at Ohio State University and supported himself by working off campus as a janitor and boxcar loader.

Jesse Brown had dreamed of becoming an aviator since his father took him to an air show when he was a child. In 1946, he left school and enlisted in the Naval Reserve and was admitted to the naval aviation program. After flight training in Illinois, Iowa, and Florida, where he repeatedly encountered racism, Brown was one of six–out of a hundred who had started the program–to earn “Wings of Gold” on October 28, 1948. During training he secretly married his high school sweetheart, Daisy Pearl Nix, with whom he had a daughter. He received his commission on April 26, 1949. Ensign Brown was initially posted to the Atlantic Fleet and assigned to fighter squadron VF-32, flying off the carrier USS Wright. With the outbreak of war in Korea in 1950, Brown’s squadron was transferred to the Pacific Fleet and the aircraft carrier USS Leyte.

By late 1950, Brown was a squadron section leader and had participated in a number of actions supporting United Nations’ ground troops. On December 4, 1950, on a mission toward the Chosin Reservoir, Chinese anti-aircraft fire ruptured Brown’s F4U Corsair’s fuel line and forced him crash land in a snowy mountain pasture. Brown’s best friend and wingman, Lt. (j.g.) Thomas L. Hudner Jr., knowing he could be court-martialed, disobeyed orders to continue the mission and instead risked his life and crash-landed his plane near Brown’s. Unfortunately, Brown was seriously injured and trapped in the cockpit. Hudner was unable to free him, and he died. Afterwards Hudner was evacuated by helicopter, but it was deemed too dangerous to retrieve Brown’s body. The navy also feared that the Corsair could come into enemy hands; therefore, a “warrior’s funeral” was ordered. The entire crash site was incinerated with napalm.

Ensign Brown, who had been lionized by the Black press since becoming a Navy pilot in 1948, was posthumously awarded the Air Medal, Distinguished Flying Cross, and the Purple Heart. On April 13, 1951, President Harry S. Truman hosted a ceremony at the White House attended by Brown’s  family as well as Lt. Hudner. Hudner recounted that the aviator’s last words were: “Just tell Daisy how much I love her.” Brown was survived by his wife, Daisy, and their daughter, Pamela Elise Brown.

In 1973, twenty-three years after his death, the frigate USS Jesse L. Brown was christened in his honor.  On November 23, 2022, Columbia Pictures will release a biopic, Devotion, based on Ensign Brown’s life.