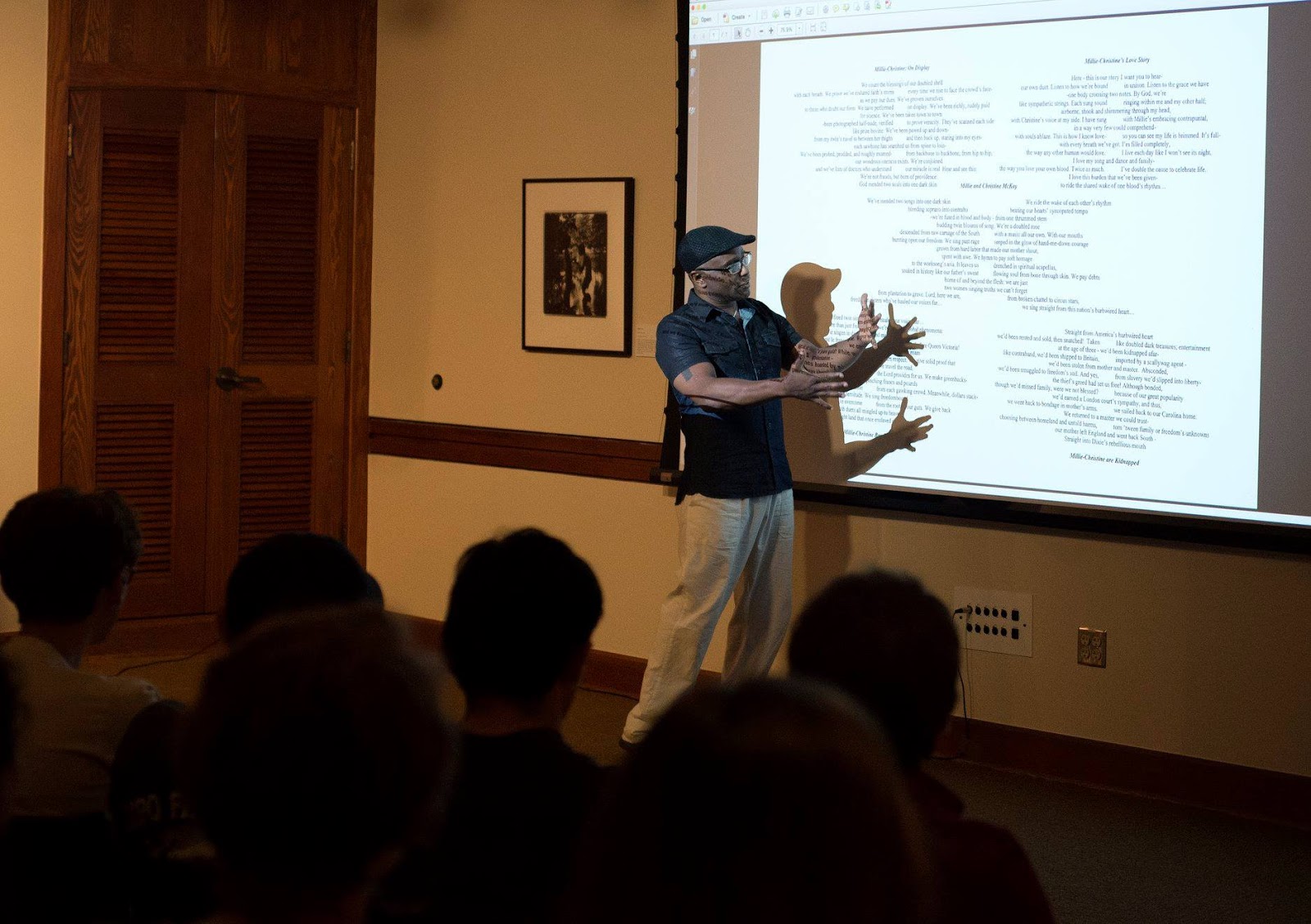 Nationally acclaimed poet Tyehimba Jess was born in Detroit, Michigan in 1965. His father worked in the City’s Department of Health and served as vice president of Detroit’s National Association for the Advancement of Colored People (NAACP). His mother was a teacher and a nurse who founded a nursing school at Wayne County Community College in 1972.

Jess began writing poetry at the age of 16. After graduating from high school in 1984 he initially enrolled in the University of Chicago in Illinois, intending to be an English major so that he could pursue his career as a Poet.  Instead after three years he dropped out of college in 1987.

From 1987 to 1989 Jess worked multiple jobs that included an intern at a bank and a substitute teacher as a means of supporting himself. In 1989 he returned to the University of Chicago and changed his major to public policy. After taking classes from poet and scholar Sterling Plumpp he re-discovered his passion for poetry. Plumpp became Jess’s mentor and after taking his Plumpp’s classes focusing on the Harlem Renaissance and Black Arts Movements, Jess moved back to Poetry. He graduated in 1991 with a B.A. in public policy, and in 2004 he obtained his M.F.A. at New York University.

In 2005, Jess released his first book of poems titled Leadbelly. The book focused on the life of blues musician Huddie “Leadbelly” Ledbetter. It was chosen for the National Poetry Series by editor Brigit Pegeen Kelly and voted one of the top three books of poetry of the year by Black Issues Book Preview. A Publishers Weekly reviewer was quoted as saying “the collection’s strength lies in its contradictory forms; from biography to lyric to hard-driving prose poem, boast to song, all are soaked in the rhythm and dialect of Southern blues and the demands of honoring one’s talent.”

Jess’s second book of poetry, Olio (2016), which focused on the story behind America’s blues, work songs, and church hymns, and examined the lives of mostly unrecorded black performers before and after the Civil War, received the 2017 Pulitzer Prize. Jess is the sixth African American to receive the award. Previous winners were Gwendolyn Brooks (1950), Rita Dove (1987), Yusef Komunyakaa (1994), Natasha Trethewey (2007) and Tracy K. Smith (2012). Olio also received the Anisfield-Wolf Book Award, the Midland Society Author’s Award in Poetry, and an Outstanding Contribution to Publishing Citation from the Black Caucus of the American Library Association.

Jess was a two-time member of the Chicago Green Mill Slam Team (2000, 2001). He was also Chicago’s Poetry Ambassador to Accra, Ghana. While the 2016 Pulitzer Prize tops his list of honors, he has also received a Chicago Sun-Times Poetry Award, a Gwendolyn Brooks Open Mic Poetry Award, and the Anisfield-Wolf Book Award. He has also been awarded poetry writing fellowships by the Illinois Arts Council, Ragdale, and the Fine Arts Work Center as well as a Lannan Writing residency fellowship.

Jess has taught at Juilliard, the University of Illinois, Urbana-Champaign, and currently a professor of English at the College of Staten Island.