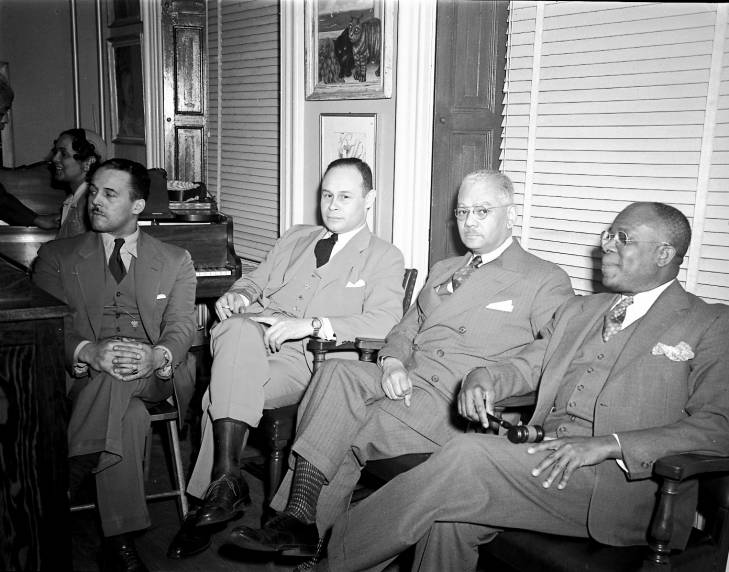 Walter Fitzgerald Jerrick, prominent Philadelphia, Pennsylvania physician and founder of The Pyramid Club was born in Georgetown, British Guiana, on March 21, 1894. He attended the public schools there until October 12, 1908, when he came to the United States and enrolled at Downingtown School in Philadelphia.

In 1909 Jerrick entered Lincoln University, in Pennsylvania. While there he pledged recently founded Alpha Phi Alpha Fraternity and in 1912 became a charter member of Nu Chapter.  After his graduation from Lincoln University in 1913, he enrolled in the University of Pennsylvania Medical School. He graduated in 1919 with his Doctor of Medicine degree.

Jerrick received a fellowship and decided to pursue additional training abroad.  He received postgraduate training in 1920-1921 at the University of Paris, France, the University of Edinburgh, Scotland, and at St. Mary’s Hospital in London. Once back in Philadelphia, he established an office in South Philadelphia.  He also became an associate gynecologist at the Joseph Price Hospital in the city.

Jerrick became a member of the National Medical Association, the Philadelphia County Medical Society, and the American Medical Association during the 1930s. His civic activities included membership in the Central Interracial Committee of the YMCA, the Southwest Branch of the YMCA, and the Philadelphia Republican Council.  He was also a member of the Board of the Institute for Colored Youth (Cheney University) and the First African Presbyterian Church.

In 1937, along with a handful of fellow African American doctors and businessmen, he founded The Pyramid Club which would eventually become a major Philadelphia social club. The club was the only social organization that required their members to hold a membership in the National Association for the Advancement of Colored People (NAACP). Located originally in the basement of the Christian Street YMCA, its mission was “ to foster the cultural and social advancement of Negroes in Philadelphia.” He served as the club President for ten years, and originated the Pyramid Annual Art Exhibit which became famous across the city and region for bringing together local and national artists.  His collaboration in the promotion of the Provident Personality Award, also sponsored by the Pyramid Club, brought scores of national celebrities to Philadelphia to receive the award.  By 1940, membership swelled to 200 and moved to a larger location at 1517 Girard Avenue.  Membership peaked at over 350 in 1944.

Walter and his wife Sarah (Saddie) never had any children together but the 1940 Philadelphia Census lists the household as having several boarders from the south. Many local families that had extra rooms often boarded the many transient travelers that came from across the globe.

Dr. Walter Fitzgerald Jerrick died on October 23, 1953, and is interred at Eden Cemetery.  After his death, membership in the Pyramid Club began to decline and in 1963 the organization closed its doors for the final time.