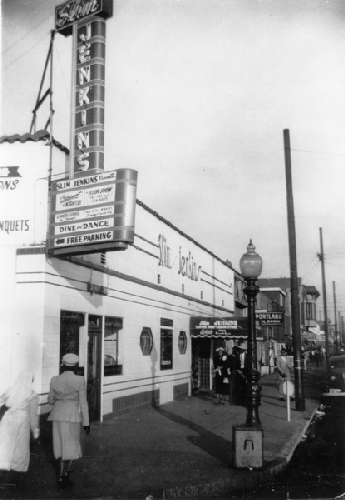 Harold Jenkins was an African American entrepreneur and owner of the renowned Slim Jenkins Supper Club in Oakland, California, popular from the 1930s to the 1960s.  Jenkins was born July 22, 1890, in Monroe, Louisiana and relocated to Oakland shortly after World War I, and found work as a waiter.

Oakland served as an urban center for African Americans migrating from the South and black businesses flourished along Seventh Street, Oakland’s black business district.  Slim Jenkins saw the economic opportunity in the business district and opened the city’s first liquor store December 5, 1933, the same day as the repeal of Prohibition.

Jenkins’ store, located at 1748 Seventh Street, soon expanded into the Slim Jenkins Café, which included his famous nightclub, restaurant, banquet space, and a market.  The club was strategically located near the rail yards and the sites of former jazz clubs made popular in the 1920s.  Jenkins capitalized on the club’s location, increasing patronage and attracted a racially mixed, middle-class clientele.  Jenkins offered performances by celebrated African American musicians, including B.B. King, The Ink Spots, Dinah Washington, and Nat King Cole.  The club also boasted a high-profile clientele, among them President Franklin D. Roosevelt, several Oakland mayors, and William Knowland, a Republican senator and owner of the Oakland Tribune.  The Slim Jenkins Supper Club enjoyed such wide success that rumors surfaced that the club was financed by local gambling ringleader Charles “Raincoat” Jones, but those rumors were never substantiated.

Jenkins successfully operated other businesses in the Seventh Street district and was known for his affiliation with and donations to the Republican Party.  He was affectionately known as the “Mayor of West Oakland” and was a member of the Port Oakland Community Club, the Boys Club of Oakland, the National Association for the Advancement of Colored People (NAACP), and served as vice president of the Transbay Federal Savings and Loan Company.

The Seventh Street district was forever altered during the 1960s when the United States Postal Service demolished twelve blocks of property to erect a new postal facility and again with the arrival of Oakland’s public transit system.

Jenkins was married to Elsie Jenkins. He died in Oakland in 1967 at the age of 76.