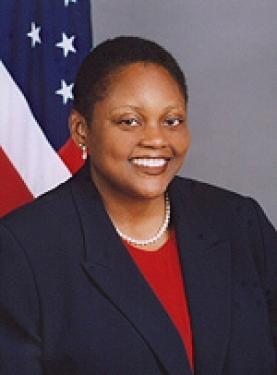 Ambassador Jendayi E. Frazer is currently on the faculty at Carnegie Mellon University in Pennsylvania.  She has been there since 2009 as the university’s Distinguished Public service Professor in the Heinz College School of Public Policy and Management.  Frazer is also the Director of Center for International Policy and Innovation.  Along with her prominent positions at Carnegie Mellon, Frazer serves as an Adjunct Senior Fellow for African Studies at the Council on Foreign Relations.

Frazer is a native of Virginia who was born in 1961.  She is the daughter of Ida Frazer. Frazier attended Stanford University in California receiving a B.A. in Political Science and African/Afro-American Studies and an MA in International Policy Studies in 1985.  In 1989, she received another master’s in International Development Education before earning her PhD in Political Science in 1994 both at Stanford University.  Later that year she served as a visiting fellow at the Center for International Security and Arms Control at Stanford.

In 2001, Frazer was named Special Assistant to President George W. Bush and Senior Director for African Affairs at the National Security Council.  In this position, Frazer often met with President Bush to find was to address major issues in Southern Africa including the HIV/AIDS epidemic, peacekeeping in Liberia and ending starvation in Zimbabwe.

On August 3, 2004 President Bush nominated Frazer to be the United States Ambassador to South Africa.  After U.S. Senate confirmation, she became the first woman to hold the position.  As ambassador, Frazer administrated the expansion of U.S.-sponsored HIV/AIDs prevention, care, and treatment programs.  Also she made efforts towards keeping regional peace throughout South Africa when she orchestrated a bilateral agreement with the South African Government for the African Contingency Operations Training Assistant program (ACOTA).

Frazer served as ambassador for one year before returning to the United States on August 26, 2005 when she was appointed to the position of Assistant Secretary for the Bureau of African Affairs.  In this position, Frazer designed Bush administration’s policies that assisted in ending wars in Sierra Leone, Liberia, Burundi, and the Democratic Republic of the Congo.

In 2007 Frazer was influential in resolving a political conflict that developed after Kenya’s controversial presidential election.  For her efforts in Kenya, Secretary of State Condoleezza Rice presented Frazer with the Distinguished Service Award in 2009.  The following year Frazer received the Dame Grand Commander in Human Order of African Redemption Award from President Ellen Johnson Sirleaf of Liberia.  President Sirleaf presented the award to Frazer for her contribution in ending Liberia’s civil war and restoring civility and democracy to the country.  She served as Assistant Secretary for the Bureau of African Affairs until 2009.