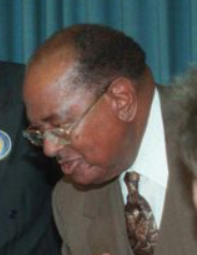 Rev. Theodore Judson Jemison was a civil rights leader and president of the National Baptist Convention. He was responsible for leading the Baton Rouge Bus Boycott in Louisiana in 1953, the first large-scale bus boycott protesting racial segregation in the South and advised Rev. Dr. Martin Luther King, Jr. on leading the Montgomery (Alabama) bus boycott two years later. Rev. Jemison also played an instrumental role in creating the first national headquarters of the National Baptist Convention, the largest black denomination in the U.S. when he established the World Baptists Center in Nashville, Tennessee. He transformed the National Baptist Convention from a nonpolitical organization into an activist group that made a prominent impact during the Civil Rights Movement.

T. J. Jemison, as he was generally known, was born on August 1, 1918 in Selma, Alabama to parents David and Henrietta Jemison. The youngest of six children, Jemison grew up in Selma attending segregated public schools before going to Alabama State University in Montgomery. After graduating in 1940, he attended Virginia Union University in Richmond, Virginia where he earned his divinity degree.

In 1949 Rev. Jemison was named pastor of the Mount Zion First Baptist Church in Baton Rouge, where he remained for fifty-four years. During much of his time as pastor, Mount Zion was the largest black church in Louisiana.  Rev. Jemison organized voter registration efforts that led to greater political power for black Baton Rouge residents.  One consequence of that new power was the creation of over a dozen new public schools for African Americans.

In 1953, Jemison convinced the Baton Rouge City Council to abolish the law that prevented black citizens from sitting in the first ten rows of public buses. This resulted in the white bus drivers going on strike to prevent implementation of the law which they saw as an undermining of racial segregation on the buses.  When the city rescinded the law, Rev. Jemison and other Baton Rouge leaders initiated a bus boycott by local black residents who comprised 80% of the bus riders.  He organized a free-ride system to help blacks get around without the access to public transportation.  After the week-long boycott, a compromise was reached in which only the first two rows of public buses were reserved for whites. Some Baton Rouge leaders, however, felt Rev. Jemison capitulated to quickly to the demands of city leaders. This protest nonetheless was very influential to the Montgomery bus boycott led by Dr. Martin Luther King.

Along with Rev. Dr. Martin Luther King, Jr., Jemison helped found the Southern Christian Leadership Conference (SCLC). This civil rights organization worked through churches to help organize non-violent protests across the South to end racial segregation. The Conference allowed leaders from different states across the South to coordinate protest activities.  From 1982 to 1994, Rev. Jemison was president of the National Baptist Convention, following his father, Rev. D.V. Jemison’s footsteps, who was president of the organization from 1940 to 1953.

In 1945 Rev. Jemison married Celestine Catlett Jemison, and together they had three kids, T.J. Jemison, Jr., Dianne Jemison Pollard, and Betty Jane Wagner.  Rev. Jemison, who was a member of  Sigma Pi Phi and Alpha Phi Alpha Fraternities, died on November 15, 2013 at the age of 95 in Baton Rouge, Louisiana.