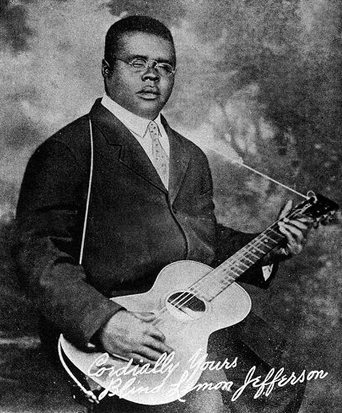 Blind Lemon Jefferson was born in Couchman, Texas, sometime around the 1890s although the exact date is not known and several are claimed. He was the youngest of seven children and the only one of them born blind. The details of his birth and young life are not well known, nor are the reason that he first began to play guitar and sing, but his influence on the development of blues is well known. He gained the respect of his peers with what were termed inimitable skills, and left traces of his musical characteristics in most of the blues that came after him.

Even though he started out playing on street corners near his hometown, by 1917 Lemon was living in Dallas and was already well known and admired by his peers. He began traveling by train to surrounding areas and journeyed extensively, where he met other blues greats such as: Huddie Ledbetter (Leadbelly), Robert Wilkins and Son House. It was widely thought that he played in every Southern state at one time or another and several artists recount stories of playing with him multiple times. Lemon was a firm businessman, playing only for money, with a reputation for stopping as soon as it did.

In late 1925, Lemon met Sammy Price, a Dallas talent scout for Paramount records. Soon after, Lemon traveled to Chicago to record his first single for Paramount, a song called “Long Lonesome Blues” which became a hit in May 1926. “Matchbox Blues” another Blind Lemon song was later covered by the Beatles, one of many Lemon songs that were covered by rock ‘n’ roll performers.  Lemon was a very popular recording artist who ended up recording 42 albums, and over 100 recordings with Paramount during his relatively short life.

Blind Lemon Jefferson died in Chicago in late December 1929 and was taken back to Dallas, Texas to be buried at the Wortham Cemetery.