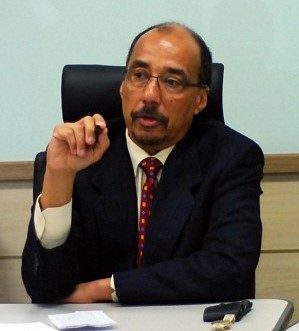 Jay T. Harris is best known as the late 20th century black newspaper executive who led a major daily newspaper, the San Jose Mercury News. Born December 3, 1948 in Washington, D.C., Harris is the son of World War II veteran and IBM employee Richard James Harris, and social worker Margaret Estelle Burr Harris. In 1970 Harris graduated with a degree in English from Lincoln University in Pennsylvania where he was editor of the campus newspaper.

Harris’s first job as a professional journalist was as a reporter for the Wilmington News-Journal in Delaware. By 1975 Harris while still at the paper, took employment as a professor and assistant dean at the Medill School of Journalism at Northwestern University in Evanston, Illinois, a pattern of moving between actively engaging in journalism and teaching journalism, for the rest of his career.

While at Northwestern he established a national census of minority employment in journalism for the American Society of Newspaper Editors. This accomplishment secured him a spot on the list of the 100 Most Influential Black Journalists of the 20th Century, compiled by the National Association of Black Journalists (NABJ). Harris left academe in 1982 to work as a correspondent and weekly columnist for the Gannett News Service. Three years later he was made executive editor of the Philadelphia Daily News, a Knight Ridder Inc. newspaper. He moved up at the newspaper eventually becoming Vice President of Operations.

In 1994, Harris was put in charge of another Knight Ridder newspaper, the San Jose Mercury News, as chairman and publisher. He was the first African American to hold this position. During his seven-year tenure he expanded the newspaper’s coverage of business and technology in the paper’s home region, Silicon Valley; inaugurated Nuevo Mundo and Viet Mercury, Spanish and Vietnamese versions of the newspaper; established the nation’s first news website (https://www.mercurynews.com/) in 1995; increased the newspaper’s daily circulation and Sunday circulation from 100,000 to 333,000; and substantially increased the number employees who were women and people of color. Harris was credited for having contributed to the rise in prominence of the newspaper, a fact confirmed when the Columbia Journalism Review ranked it one of the nation’s ten best. The paper’s success prompted Knight Ridder, the parent company, to move its headquarters from Miami, Florida to San Jose in 1998.

But by 2000 in the wake of the bursting of the dot-com bubble, revenue from classified ads plummeted and competition from online job listing and news sites negatively impacted all newspapers, forcing them to drastically cut back operations. The San Jose Mercury News, however was disproportionately affected because it was the major paper in the Silicon Valley and thus dependent on revenue from tech companies. Faced with enduring employee layoffs that jeopardized his efforts to advance racial diversity, Harris resigned on March 19, 2001.

In 2002, Harris returned to teaching, this time at the University of Southern California as the Wallis Annenberg Chair in Journalism and Communication at the Annenberg School for Communication, and also was a founding director of The Center for the Study of Journalism and Democracy; and at Santa Clara University where he held the title of Presidential Professor. A former member of the Pulitzer Prize Board of Directors and the National Advisory Board of the Poynter Institute, he was the partner of the late Nancy Hicks Maynard (1946-2008), the widow of Robert C. Maynard (1937-1993), the previous owner of the Oakland Tribune.