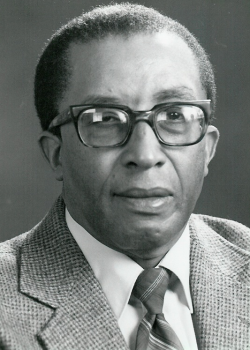 Microbiologist James Monroe Jay was born in Fitzgerald, Georgia on September 12, 1927.  Following service in the U.S. Army during World War II he earned his bachelor’s degree at Paine College (cum laude), then his master’s in 1953 and Ph.D. in bacteriology and biochemistry at Ohio State University in 1956.  After postdoctoral work at OSU he began four years of teaching at Southern University.  He spent the balance of his full-time teaching career (1961 to 1994) at Wayne State University.  Jay continues his scientific investigations — primarily focused on E. coli — in a laboratory at his home in Henderson, Nevada and is an adjunct professor in the Department of Biological Sciences at the University of Nevada at Las Vegas.

Jay has published nearly 70 research papers but he is best known for his classic, internationally popular textbook Modern Food Microbiology (New York: Van Nostrand Reinhold) which has enjoyed seven editions since it first appeared in 1970.  It has been published in Spanish, Hindi, Malaysian, and Chinese. An expert in the history of blacks in the sciences, who has tried to encourage their entry into science-related careers, he has also published the 87-page Negroes in Science: Natural Science Doctorates, 1876-1969 (Detroit: Balamp Publishing, 1971).

Jay’s interest and expertise in food safety, consumer education, and meat microbiology has lead to advisory appointments to government agencies, fellowships, travel to international conferences, and recognitions by fellow scientists including the Percy Julian Award from the National Organization for the Advancement of Chemists and Chemical Engineers and the Outstanding Teacher Award from the Society for Industrial Microbiology.