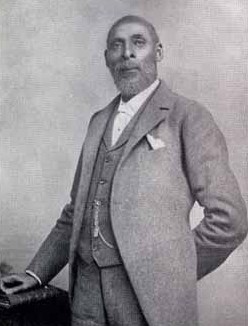 Reverend John Jasper is arguably one of the most famous black ministers of nineteenth-century Richmond, Virginia, who gained popularity for his electrifying preaching style and his ability to spiritually move both black and white Baptists.  He began his career in the early 1840s, preaching at funerals of slave and free black parishioners and giving occasional sermons at the First African Baptist Church.  His popularity grew quickly and not only among Richmonders; after giving a guest sermon to the Third African Baptist Church in the nearby city of Petersburg, Jasper was invited by that congregation to preach every Sunday.  Jasper’s accomplishments are even more remarkable given the fact that he was a slave in the tobacco factories and iron mills of Richmond during the first 25 years of his ministry work during a time when Virginia law expressly prohibited blacks from preaching.

Following the Civil War, Jasper became a full-time pastor and in 1867 organized the Sixth Mount Zion Baptist Church in Richmond, ministering to hundreds of local black Baptists, but many whites as well.  His sermons continued to attract eager audiences, but none seem to draw more listeners than his famous discourse, “De Sun Do Move” given in 1878.  Faithful followers, devoted fans, curious onlookers and even news reporters gathered at the church for a standing-room only lecture on the powers and mysteries of God.  Though not all were convinced by Jasper’s geocentrism, his orating skills mesmerized most; as one skeptic wrote “Jasper didn’t convert me to this theory, nor did he convert me to his religion, but he did convert me to himself.”

Jasper’s work extended far beyond preaching to the devoted and attempted to minister to all black Richmonders; the Sixth Mount Zion Baptist Church became active in providing community services including aid to the elderly and the destitute.  Jasper continued in this capacity until 1901 at the age of 88, after half a century of serving God.