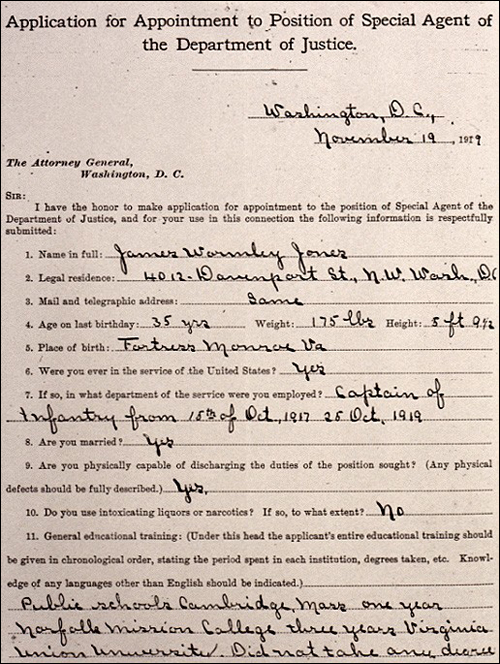 James Wormley Jones is the first African American FBI agent in the United States. Jones was born on September 22, 1884 to John Bradford Jones and Sally Jones in Fort Monroe, Virginia. Jones had one sibling, a brother named Paul W. Jones. His family later moved to Cambridge, Massachusetts where he spent his teenage years. Jones returned to Virginia in 1902 to attend Norfolk Mission College in Norfolk, Virginia. He also attended Virginia Union University in Richmond, Virginia where he completed his education in 1905.

After graduation, Jones started working for the Washington Metropolitan Police Department of Washington D.C. During his time working with the police department he rose in the ranks from patrolman to a horseman and then eventually a motorcycle policeman. By 1919, he was promoted to detective.

When the United States entered World War I in 1917, Jones enlisted in the United States Army. He trained to be an officer at the racially segregated Officers Training School at Fort Des Moines, Iowa. After his training was complete, 33-year-old Jones was commissioned a captain and assigned to Company F in the 368th Infantry Regiment, 92nd Division. In 1918, Jones and Company F was sent to France where his unit saw action in the Vosges Mountains Argonne Sector and the Metz Frantz Campaigns. He also became an instructor of the 92nd Division School of Specialists where he was promoted to senior instructor. After World War I ended in 1919, Jones returned to his job as a Washington, D.C. police officer.

On November 19, 1919, Jones was appointed as the first African American special agent by A. Bruce Bieluski who was then Director of the Bureau of Investigation. Soon after he joined the organization’s name was changed to the Federal Bureau of Investigation (FBI) and was headed by newly appointed director, J. Edgar Hoover. Jones was assigned undercover work and charged with infiltrating “radical” black organizations.

Jones’s first undercover assignment came in 1921 when he infiltrated the African Blood Brotherhood, a secret armed African American black liberation group headquartered in New York City and headed by Cyril Briggs. It is unclear of the impact his infiltration of that group since by the end of 1921 most of its members had been absorbed into the newly-formed U.S. Communist Party While working with the FBI in New York City on the African Blood Brotherhood, Hoover assigned Jones to infiltrate Marcus Garvey’s Universal Negro Improvement Association (UNIA). Jones was given an FBI code number for his reports: he was known to Hoover and a select group of FBI administrators as Agent 800. The information Jones provided the Bureau would help lead to the arrest of Garvey on mail fraud charges in January 1922.

In 1923, Jones resigned from the FBI after it became generally known that he was an ex-police officer. With that knowledge made public he was no longer effective as an organization infiltrator.

Much of Jones later remains a mystery. Jones was married to Ethel Peter Jones and the couple had two children, a son, John T. Jones, and a daughter, Mildred Jones. James Wormley Jones died on December 11, 1958 in Dormont, Pennsylvania at the age of 74.