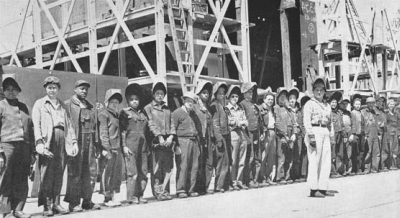 Marinship had a closed-shop contract with the International Brotherhood of Boilermakers, which required that all of the corporation’s shipyard construction workers must be members of the union.  Boilermakers Local 6, which had jurisdiction over the Marinship yards, banned African Americans.  If African Americans wished to work in Marinship yards, they were forced to join Auxiliary A-41, an all-black unit controlled by Local 6.  In 1943, more than 200 African Americans, including Joseph James, who refused to pay the A-41 dues Local 6 demanded in accordance with their closed-shop contract were fired from their jobs at Marinship.  James filed a lawsuit to stop the dismissal of the African American workers.

The case, argued in part by notable African American attorney Thurgood Marshall, went before the California Supreme Court in 1944.  The Marinship Corporation and the Boilermakers argued that the union contract required the segregated local and mandated that the African American workers pay dues to the auxiliary.  The court rejected that argument saying in its ruling, “The foregoing illustrations drawn from the complaint and the union rules clearly establish substantial discrimination against Negro workers who accept membership in the auxiliary local. Since they are denied union membership on terms of equality with other workers, the case is the same as if they were wholly denied the privilege of membership.”

The unanimous decision in favor of James and the other workers held that if a closed-shop contract was in place and that workers must be union members in order to work, then unions cannot be closed to any members based on their race or any other arbitrary conditions.

The California Supreme Court then condemned the entire process of excluding African Americans from labor unions stating that the, “discriminatory practices involved in this case are, moreover, contrary to the public policy of the United States and this state. The United States Constitution has long prohibited governmental action discriminating against persons because of race or color.”

The decision was an important victory in the fight to end segregation in the work place and the fight for civil rights for all workers regardless of color.