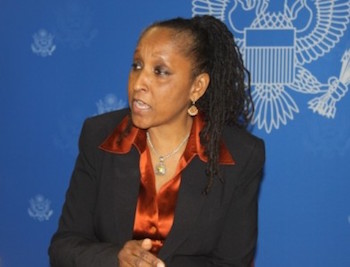 Makila James is currently serving as the U.S. Ambassador to Swaziland.  James was nominated by President Barack Obama early in 2012.  Following confirmation by the U.S. Senate on July 31, 2012, James arrived in Mbabane, the capital of Swaziland and presented her credentials to the King of Swaziland on September 20, 2012.

Makila James, one of ten children born to Albert and Eddie Mae James, was born in July 1957 in New York.  She earned her Bachelor’s Degree from Cornell University in 1979, double majoring in Africana Studies and American History. She was one of the few African Americans inducted into Cornell’s Quill and Dagger Honor Society at the University.  Three years later James received a Juris Doctor (law degree) from Columbia Law School and in 2010 she received a Master’s Degree in National Security from the National Defense University in Washington, D.C.

James’s career as a diplomat began when she joined the U.S. Foreign Service in 1988. Her first overseas posting was as a Consular Officer in Kingston, Jamaica from 1989 to 1992.  From 1993 to 1995 she was a Political/Economics Officer at the U.S. Consulate in Kaduna, Nigeria and she later served as Political Officer at the U.S. Embassy in Harare, Zimbabwe.

Ambassador James also held positions at the U.S. State Department in Washington, D.C. including Watch Officer at the Operations Center, Desk Officer for Sierra Leone and Gambia in the Office of West African Affairs, and International Relations Officer in the Department’s Office of International Organization Affairs.  She was the State Department representative in the International Relations Office for Africa at the United Nations Security Council in New York City, New York.  From 2002 to 2003 James was a Research Fellow at the Georgetown University Institute for the Study of Diplomacy in Washington, D.C.

From 2003 to 2006, James served as a member of the U.S. State Departments Policy Planning Staff. She returned to Africa between 2006 and 2007, to become the first full time Principal Officer at the Consulate General in Juba, Sudan.  While there she helped in the transition of South Sudan toward becoming an independent nation in 2011.  Back in the United States, from 2007 to 2009, she was the Deputy Director of the Office of Southern African Affairs, and from 2009 to early 2012 Ambassador James served as Director of the Office of Caribbean Affairs.

Ambassador James’s tenure as the official U.S. representative has generated some controversy.  In 2014 she and other Embassy staff members publicly pledged their support to two imprisoned Swaziland dissidents, Bheki Makhubu, editor of The Nation magazine and Thulani Maseko, a human rights lawyer.  James personally appeared in the Swaziland High Court (the equivalent of the U.S. Supreme Court) on behalf of the dissidents as attorneys argued for their immediate release.  Although a number of individuals in and outside the Swazi government claimed that Jones had violated her diplomatic status by interfering in the internal affairs of Swaziland, no formal complaint was lodged with the U.S. State Department and it in turn has not publicly objected to her actions.

Ambassador Malika James and her husband, Louis Wells, have one son, named Mandela.