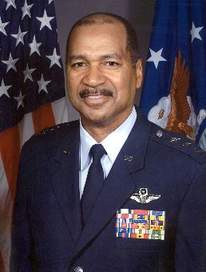 Lieutenant General Daniel James III became the first African American to be named Director of the Air National Guard upon assuming the position in 2002. He was the son of Daniel James Jr., the first black four-star general in the U.S. Air Force. In 2006 James III’s notable 38-year career came to an end once he decided to retire.

Lt. Gen. Daniel James III was born in Tuskegee, Alabama, to Daniel and Dorothy James on September 7, 1945. James had one sibling, a sister named Denice. At 18 on May 27, 1963 James enlisted in the U.S. Air Force where he served as an active duty member from June 20, 1963 until May 16, 1964. One month later, on June 29, 1964, James entered the U.S. Air Force Academy where he remained for a year until enrolling at the University of Arizona. There James earned his Bachelor’s in Psychology in 1968 and was a distinguished graduate of the university’s Air Force Reserve Officers’ Training Corps (ROTC) program, through which he earned his commission as a second lieutenant in the Air Force.

In June of 1969, James received his pilot wings at Williams Air Force Base in Arizona after completing his Undergraduate Pilot Training. He then served until August of 1970 as a forward air controller at the Cam Ranh Bay Air Base in South Vietnam.  He flew more than 500 combat hours during the Vietnam War. Upon return to the Williams Air Force Base in Arizona, James became a squadron instructor pilot for the 82nd Student Squadron. Two years later James became a squadron flight training class commander, after which he worked in Washington, D.C.at the Air Force Headquarters as an air operations staff officer. From June 1974 until May 1975, James served at the Udorn Royal Thai Air Force Base in Thailand as a squadron assistant flight commander.

Over the course of his career James flew over 300 combat missions in Southeast Asia and 4,000 hours. Once the Vietnam War ended, James spent the rest of his career in the American west and southwest regions. In 1978 James left active duty and joined the Texas Air National Guard, where he later became the operations group commander of the 149th Fighter Wing in 1994 and Adjutant General of the Texas National Guard in Austin in November, 1995 where he remained until 2002. Lt. Gen. James’s last position before retirement was Director of the Air National Guard at the Pentagon, a position that put him in power of 88 flying units throughout the United States, Guam, Puerto Rico, and the Virgin Islands.

Lt. Gen. James III received numerous awards throughout his career, including the Distinguished Service Medal; the Legion of Merit; and the Distinguished Flying Cross, which was presented to James by his father, in addition to multiple other recognitions.