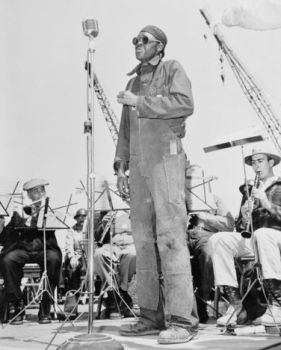 Joseph James was president of San Francisco National Association for the Advancement of Colored People (NAACP).  In 1944 he won a successful lawsuit, James v. Marinship Corporation which prohibited the Boilermakers union from discriminating against black workers in California.

James and his wife, Alberta, came to San Francisco in the mid-1930s with the Broadway musical, The Green Pastures, subsidized by the Federal Theater Project.  According to some sources, James was a very talented singer.  They stayed in the city after the production ended and in 1942, after World War II began, James got a job as a welder at Marinship in Sausalito.  In 1943 he became president of the San Francisco branch of the National Association for the Advancement of Colored People (NAACP).

The International Brotherhood of Boilermakers, part of the American Federation of Labor, excluded African Americans from their union and the shipyards until 1937 when shipyards began hiring them in anticipation of President Roosevelt’s antidiscrimination Executive Order 8802 in 1941.  After that date, however, the Boilermakers segregated African Americans into “auxiliary locals” and excluded them from higher-paid skilled labor positions which they reserved for white members.

James was one of 950 African Americans fired from shipyards on the west coast when they protested against the auxiliary scheme in the summer of 1943.  In December, the Fair Employment Practices Commission directed the Boilermakers to stop discrimination and abolish the auxiliaries but the union defied this executive order.  James filed a lawsuit against the Boilermakers which came before the California Supreme Court in 1944.

The James opinion, handed down in January 1945, reaffirmed the U.S. prohibition of discrimination based on race or color because of Executive Order 8802 and ruled that a closed union shop did not allow locals to deny employment to individuals because of their race or color.  Nor could union rules bar certain racial groups from full membership in unions when they controlled employment.  The court opinion challenged the color line in employment by holding organized labor accountable alongside corporations in banning discrimination.