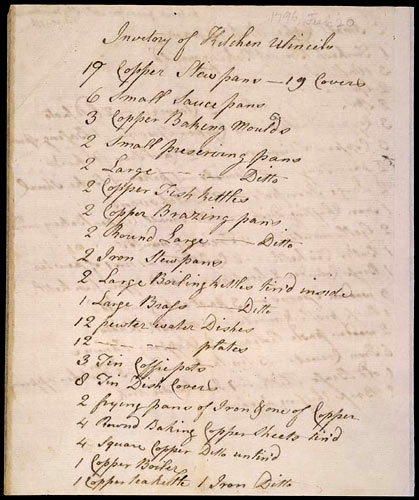 Though far more is known about his younger sister, Sally Hemings, James Hemings nonetheless was an eyewitness to history despite being enslaved most of his brief life. Hemings, born in 1765, was one of the twelve children of the black slave Elizabeth (Betty) Hemings and English-born planter and slave owner John Wayles. When Wayles’s white daughter, Martha, married future United States President Thomas Jefferson on January 1, 1772, the latter acquired James and Sally Hemings, his wife’s half-siblings, as well as 133 other slaves.

James Hemings, who was born on Wayles’s plantation in Charles City County, Virginia, arrived at Monticello at age nine on the eve of the American Revolution. He and one of his brothers were at Monticello when Jefferson served as a delegate to the Continental Congress in Philadelphia and wrote the Declaration of Independence in 1776. When Jefferson was elected Governor of Virginia in 1779, they were his personal attendants. Sixteen-year-old Hemings and his brothers conveyed Jefferson’s wife and children to safety when Loyalist and British soldiers prepared to attack Richmond in January 1781.

In July 1784, Jefferson, now a widower and appointed Minister Plenipotentiary to France, arranged to have James Hemings travel with him to master what the future president called “the art of (French) cookery.” Sally arrived three years later as a teenage nanny and would become Jefferson’s concubine. For nineteen months Hemings trained under caterer and restaurateur Monsieur Combeaux, then studied with pastry chefs and practiced cooking in the home of the Prince de Condé. Eventually he became head chef at Jefferson’s Paris townhouse, the Hôtel de Langeac. Jefferson’s decision to train Hemings as a world-class chef stemmed from a love of French cuisine and the need to entertain befitting an American minister with a tight budget that did not allow him to employ an experienced native French chef.

In the final months of their sojourn in France James and Sally were paid minimal wages for their work. Also, while in France Hemings gained some facility in speaking and reading French, using part of his salary to hire a tutor.

The French Revolution began in 1789 and the new government soon abolished slavery. Hemings knew about this change but decided to return to the United States in October 1789 with the understanding that Jefferson would free him once he had trained someone else to work as chef at Monticello. When Jefferson became Secretary of State under President George Washington, Hemings followed him to New York and Philadelphia as a paid employee.

On February 5, 1796, Jefferson made good on his bargain to free James Hemings after his brother, Peter, completed his training as chef at Monticello. But when Jefferson was elected President of the United States in 1800, he asked Hemings to be White House chef. Hemings refused to join him in the White House and cooked his last dinner for the Jeffersons at Monticello in September 1801. A few months later Hemings committed suicide in Baltimore, Maryland. He was 36.